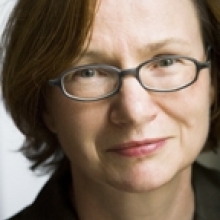 Marguerite Deslauriers works in ancient philosophy and the history of feminist philosophy.  She studied philosophy and classics at McGill (B.A. 1977) and the University of Toronto (Ph.D. 1987). In 1986 she was appointed to York University, before joining the Philosophy Department at McGill in 1988. In 1990 she received the H. Noel Fieldhouse Award for Distinguished Teaching at McGill. She founded McGill's Institute for Gender, Sexuality, and Feminist Studies (IGSF) in 2009, and was its first Director.

Areas of interest: Aristotle (metaphysics, biology, and political and moral philosophy), the history of philosophical conceptions of sexual difference, and renaissance and early modern feminist treatises, especially the work of Lucrezia Marinella and Marie de Gournay.

My primary research projects currently are an edited volume of translations of early feminist works: Equality and Superiority: Texts from Renaissance and Early Modern Europe (under contract with Oxford University Press) and a series of articles on these works.

I am a co-investigator in a collaborative research project: The philosophical foundations of women’s rights: a new history, 1600-1750 (with Jacqueline Broad, PI and Deborah Brown), funded by the Australian Research Council, 2019-22.

I was the Principal Investigator for a project funded by the Social Sciences and Humanities Research Council (SSHRC): Equality and superiority in renaissance and early modern pro-woman treatises, Insight Grant 2014-19.  One of the results of this research is a website on which searchable transcriptions of the texts, and information about the authors and their contexts, can be found: http://querelle.ca Aristotle on Definition, in the series Philosophia Antiqua, Leiden: Brill, 2007.

"The Superiority of Seventeenth Century Women," Journal of the American Philosophical Association 2020 (in press).

“Two Conceptions of Equality:  MacKinnon, Wollstonecraft and Rousseau on Natural Inequality,” Canadian Journal of Political Science 37:4 (December 2004), pp. 1-23; short-listed for the John McMenemy Prize for the best article in the CJPS, 2004.

"The Conceptualization of Masculine Power as Unjust: Tyranny in 17th C Venice," keynote address at the conference Bridging the Gender Gap through Time, Faculty of Law, King's College, London, February 22-23, 2018.

“Agency and Material Causation: Bartolomeo Goggio and Lodovico Domenichi on the Female in Aristotle’sGeneration of Animals,” at the conference European and Venetian Renaissance, University of Padua, Italy, December 12-15, 2017.

"Sexual Difference and Tyranny: Aristotle Interpreted by Lucrezia Marinella" for the panel Aristotle, Feminism and Ontology, at the annual conference of the Ancient Philosophy Society, Portland, Maine, April 28-31, 2016.

"Friendship with Men in Renaissance Feminist Arguments" as part of the panel, Friendship and Community in Early Modern Works on/by Women, at the Renaissance Society of America annual conference, Boston, March 31-April 2, 2016.

"Nature and Custom in the Education of Women: Mario Equicola (1470-1525) and Marie de Gournay (1565-1645)" at the Workshop on the History and Philosophy of Education, Department of Philosophy, University of Pennsylvania, Philadelphia, October 23-25, 2015.

"Marinella and her Interlocutors," as part of the panel Women in Modern Philosophy, Pacific APA, Vancouver, BC, April 2, 2015.