The truth about lying? Children’s perceptions get more nuanced with age 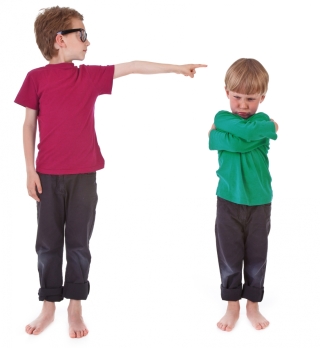 Parents don’t like it when children lie. But what do the kids themselves think about it? New research suggests truth telling isn’t black and white.

As children get older, their moral evaluations of both lies and truths is increasingly influenced by whether they think this behaviour will cause harm to either others or themselves.

Victoria Talwar, a Canada Research Chair in McGill’s Dept. of Educational and Counselling Psychology, led a research team that was interested in how a child’s moral understanding develops. They studied the behaviour of close to 100 children, aged six to 12.

The researchers showed the children a series of short videos in which childlike puppets either told the truth or lied. The variable was the outcome of the puppets’ words: Sometimes what they said caused harm to someone else (e.g., blaming an innocent person for their own misdeeds). In other scenarios, the speaker’s words harmed themselves while helping someone else (e.g., a false confession to a misdeed in order to spare the real perpetrator from punishment). The videos also portrayed puppets telling truths, such as “tattling,” could harm someone else.

A marker of moral and social development

“Looking at how children see honesty and deceit is a way of gaining insight into different stages of moral and social development,” explains Professor Talwar. “Children get a lot of messages from their parents saying that lying is always bad, but at the same time they see their parents telling ’white’ lies to make life easier. Depending on their age, this is likely to be a bit confusing for children. We were interested in gaining a more nuanced picture of children’s perceptions of truth and lies – since not all lies have negative consequences for the other person, and not all truths have positive consequences for someone else. We were curious to know at what age children start to understand this.”

Tattling is tough for kids to understand

The researchers discovered that the children had no difficulty, no matter what their age, in distinguishing truth from lies. They were also adept at deciding which behaviours to reward or condemn – with two notable differences between younger and older kids.

False confessions to help someone else were difficult to assess; younger children saw these as being more negative than older ones did. Tattling was also problematic. Younger children were less concerned by truth-telling that had negative consequences for someone else, whereas older children were more conflicted about tattling. “What we were seeing is children’s confusion around particular kinds of truths and lies,” says Shanna Mary Williams, the student who recently completed her PhD at McGill and did much of the research on this study. “Younger children see things more starkly – truths are good and lies are bad. But by the time they are 10-12 years old, children become more aware that truth and lies are less binary. The older they are, the more interested children are in the consequences of these actions. They are also more able to start looking at the intentions behind the speech.”

A need for more nuanced conversations around truth-telling

The takeaway? Children’s moral evaluations of both lies and truths is influenced by their understanding of whether the speakers’ intention is to harm another or themselves. While younger children may be reflecting what is taught by parents and caregivers when it comes to tattling (i.e. that honesty in all forms is virtuous), the researchers believe that older children may be less likely to reward tattling because they are concerned with how their peers will perceive this behaviour. In both cases, what is clear, according to the researchers, is that parents and teachers need to have a much more involved conversation about truth-telling or lie-telling with children starting as early as the age six.

To read “Children’s evaluations of tattles, confessions, prosocial and antisocial lies” by Victoria Talwar et al in the International Review of Pragmatics: DOI: 10.1163/18773109-00802007

Victoria.talwar [at] mcgill.ca (English interviews only)