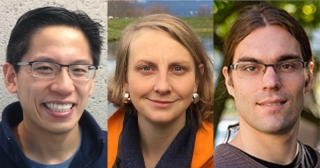 Today, the Alfred P. Sloan Foundation announced the selection of 126 extraordinary early career researchers as recipients of the 2020 Sloan Research Fellowship. Amongst the recipients are three researchers from McGill University: Simon Caron-Huot, (Assistant Professor, Department of Physics), Adrian Liu (Assistant Professor, Department of Physics and the McGill Space Institute), and Jennifer Sunday (Associate Professor and William Dawson Scholar, Department of Biology). Candidates are nominated by their colleagues, and winning fellows are selected by independent panels of senior scholars on the basis of a candidate’s research accomplishments, creativity, and potential to become a leader in his or her field. Winners receive a two-year, $70,000 fellowship to further their research.

“Being recognized by the Alfred P. Sloan Foundation is a clear sign of the quality of these early-career researchers,” said Martha Crago, Vice-Principal, Research and Innovation. “McGill University is fortunate to count talents such as these among our Faculty and we look forward to seeing their future successes.”

Past Sloan Research Fellows include many towering figures in the history of science, including physicists Richard Feynman and Murray Gell-Mann, and game theorist John Nash. Fifty fellows have received a Nobel Prize in their respective field, 17 have won the Fields Medal in mathematics, 69 have received the National Medal of Science, and 19 have won the John Bates Clark Medal in economics, including every winner since 2007.

The Sloan Research Fellowships are open to scholars in eight scientific and technical fields—chemistry, computer science, economics, mathematics, computational and evolutionary molecular biology, neuroscience, ocean sciences, and physics— and are awarded in close coordination with the scientific community.

“To receive a Sloan Research Fellowship is to be told by your fellow scientists that you stand out among your peers,” says Adam F. Falk, president of the Alfred P. Sloan Foundation. “A Sloan Research Fellow is someone whose drive, creativity, and insight makes them a researcher to watch.”

A look at McGill’s three new Sloan Research Fellows and their work:

Simon Caron-Huot is an Assistant Professor in the Department of Physics and Canada Research Chair (Tier 2) in High-Energy Physics. He works in high-energy particle theory, a branch of physics that studies the nature of the particles that constitute matter and radiation. In particular, he studies scattering amplitudes in the theory of the strong force, quantum chromodynamics, where he develops techniques to simplify and enable new calculations. These techniques harness the surprising power of general principles: relativity and quantum mechanics, to break difficult quantitative calculations into simpler building blocks.

Adrian Liu is an Assistant Professor in the Department of Physics and the McGill Space Institute. His research is focused on making the largest-ever three-dimensional map of our Universe. He concentrates on the period when the first stars and galaxies formed, the Cosmic Dawn, when matter condensed into first-generation stars and galaxies. This is done by mapping the distribution of neutral hydrogen atoms, since it is ubiquitous in space and conveniently emits faint radio waves. Therefore, observations with large radio telescopes enable the construction of such a map.

Jennifer Sunday is an Associate Professor and William Dawson Scholar in the Department of Biology. She head’s The Sunday Lab, which aims to understand the role of climate and global change on the distribution of biodiversity, through both direct and indirect ecological responses. Professor Sunday and her team use data synthesis, theory, and controlled experiments to connect physiological responses of individuals to processes regulating population dynamics and the outcomes of ecological interactions and evolution. They also aim to understand the impacts of species' range shifts on people, and opportunities to mitigate these through conservation practice.