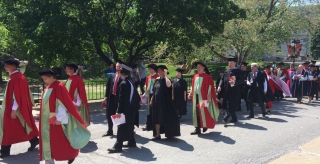 These newest honorees, seven men and seven women, represent a wide range of fields. They include the first woman to hold the position of Chief Justice, the Right Honourable Beverley McLachlin; philanthropist and founder of Dollarama, Larry Rossy, a well-known name in the retail sector; broadcast journalist Céline Galipeau who has shared some of the most important stories of our time with Canadian viewers; Vinton Cerf, known as one of the fathers of the Internet; along with other important figures in music, literature, agriculture and science.

“All of the individuals we are honoring this year have contributed significantly to their field,” says McGill Principal Suzanne Fortier. “They are also dedicated to ensuring that society benefits from their important work.”

Principal Fortier will welcome the degree recipients in ceremonies on the main campus as well as at Macdonald campus on May 31st, June 1st, 2nd 3rd, 6th,7th and 8th.