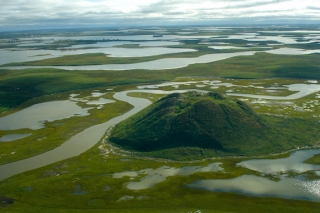 Image Caption: The Mackenzie River Delta on the Beaufort Sea, a low-lying region in the Canadian Arctic that is vulnerable to rising seas in a warming climate. CREDIT: Nadia and Harold Gomez

New research, published today in Nature, models the impacts on the Antarctic Ice Sheet of several different global warming scenarios and the resulting effects on global sea levels. The study was led by the University of Massachusetts, Amherst and included a researcher from McGill University. The scenarios that were considered range from meeting the Paris Agreement target of 2°C warming and an aspirational 1.5°C scenario to our current course which, if not altered, will yield three or more degrees of warming.

If the more optimistic 1.5°and 2° C Paris Agreement temperature targets are achieved, the Antarctic Ice Sheet would contribute between 6 and 11 centimetres of sea level rise by 2100. But if the current course toward 3°C increase in temperature is maintained, the model points to a major jump in melting that would drastically accelerate the pace of sea-level rise. The researchers found that the implications of exceeding the Paris Agreement targets for global warming become even more marked over longer timescales.

“If the rate of global warming continues on its current trajectory, we will reach a tipping point by 2060, past which these consequences would be irreversible on multi-century timescales,” says Amherst’s Rob DeConto, co-director of the School of Earth & Sustainability, and the study’s lead author. “Unless ambitious action to rein in warming begins by 2060, no human intervention, including geoengineering, would be able to stop 17 to 21 centimetres of sea-level rise from Antarctic ice melt alone by 2100.”

The researchers found that changes in Antarctica will contribute to about a 1 metre rise in sea level by 2300 if global warming is limited to 2 degrees or less. But under a more extreme warming scenario with no mitigation of greenhouse-gas emissions, the increase may reach globally catastrophic levels of 10 metres or more.

“One important message for Canada is that Antarctic ice melt will have a big impact on Canadian coastal areas. The effects of ice loss are global,” says Natalya Gomez, an Assistant Professor and Canada Research Chair in Ice Sheet - Sea Level Interactions who teaches in McGill University’s Department of Earth and Planetary Sciences. Her work contributed to assessing how changes in the bedrock beneath the ice and water levels around the edge of the Antarctic Ice Sheet impact how much and how fast the ice retreats.

The research shows that the very architecture of the Antarctic Ice Sheet itself plays a key role in ice loss. Ice flows slowly downhill, and the Antarctic Ice Sheet naturally creeps into the ocean, where it begins to melt. What keeps that ocean-bound ice flowing slowly is a ring of buttressing ice shelves, which float in the ocean but hold back the upstream glacial ice by scraping on shallow sea-floor features. Those buttressing ice shelves act both as dams that keep the sheet from sliding rapidly into the ocean, and as supports that keep the edges of the ice sheet from collapsing.

But as warming increases, the ice shelves thin and become more fragile. Meltwater on their surfaces can deepen crevasses and cause them to disintegrate entirely. This not only lets the ice sheet flow toward the warming ocean more quickly it also allows the exposed edges of the ice sheet to break off or “calve” into the ocean, adding to sea level rises. These processes of melting and ice shelf loss, followed by faster glacial flow and rapid calving are seen on Greenland today, but they haven’t become widespread on the colder Antarctic ice sheet — at least not yet.

“If the world continues to warm, the huge glaciers on Antarctica might begin behaving like their smaller counterparts on Greenland, which would be disastrous in terms of sea level rise,” concludes senior researcher, DeConto. “Missing the Paris Agreement temperature targets and allowing extensive loss of the buttressing ice shelves “represents a possible tipping point in Antarctica’s future.”