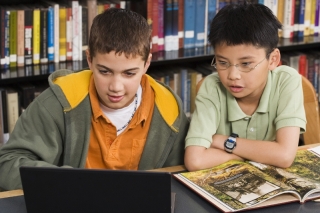 Several professionals had made this suggestion over the years. Given that homework led to one explosion after another, and that at school Ellen, who is eleven, spent her days jiggling up and down in her seat, unable to concentrate for more than ten minutes, it seemed a reasonable assumption. Yet her parents always felt that ADHD didn't quite capture the extent of Ellen's issues over the years. Fortunately the school counsellor was familiar with fetal alcohol spectrum disorder (FASD). When she learned that Ellen's birth mother had consumed alcohol during pregnancy, she raised the possibility that Ellen's problems could be attributable to FASD and referred her for further assessment.

It’s a familiar story, and most of us reading about Ellen would assume that she did indeed suffer from ADHD.

“Because the link between fetal alcohol syndrome and ADHD is so commonly described in the literature, both parents and teachers are more likely to expect these children to have attention problems,” says Prof. Jacob Burack, a professor in McGill’s Dept. of Educational and Counselling Psychology and the senior author on a recent study on the subject. “But what teachers often don’t recognize is that although the child they are dealing with is eleven years old in chronological terms, they are actually functioning at the developmental age of an eight-year old. That’s a pretty big difference. And when you use mental age as the basis of comparison, many of the attention problems that have been described in children with FASD no longer seem of primary importance.”

The researchers recruited children with FASD whose average chronological age was just under twelve years old. But their average mental age, determined by standard tests, was actually closer to nine-and-a-half years old. (The children were recruited through the Asante Centre for Fetal Alcohol Syndrome in British Columbia, and though the number of children studied may appear small, this is a fairly typical size for studies on FASD, given the difficulties of the diagnostic process.)

After using tests to measure specific aspects of attention, the researchers then compared the performance of children with FASD on these tests with the results of children of the same mental age. What they found was that while children like Ellen had difficulties with certain kinds of attention skills, notably in terms of shifting attention from one object to another, there were other areas, such as focus, where they had no significant difficulties at all. So, if we were to compare these aspects of attention to a hockey game, typically these children would have no difficulty focusing on the puck in the arena, but would have problems following the puck being passed from one player to another.

This suggests to Dr. Kimberly Lane, the PhD student who conducted the research, that there is a need to develop a more nuanced understanding of attention skills. “We use words like attention loosely, but it’s really an umbrella term that covers various aspects of attending to different people or events or environments,” says Dr. Lane. “By using more complex assessment techniques of various aspects of attention it will be possible to get a better picture of the attention difficulties faced by children with FASD,” she adds.

“But no matter what the tests say, it’s important for teachers and parents to understand that.the difficulties these children have with attention may be less important than their more general problems, and we need to work with them as they are.”

To read the paper in Frontiers in Human Neuroscience: http://journal.frontiersin.org/Journal/10.3389/fnhum.2014.00119/abstract