But will it last? 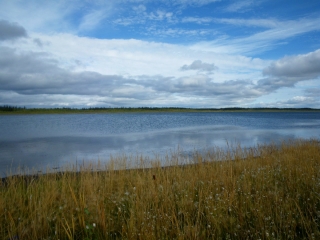 Twelvemile Lake is sometimes called the disappearing lake. That’s because over the past thirty years, as a result of climate change and thawing permafrost, the lake water has been receding at an alarming rate. It is now 5 metres or 15 feet shallower than it would have been three decades ago. This is a big change in a very short time.

As the lake recedes, bands of willow shrubs have grown up on the newly exposed lake shores over the past twenty years. What Martin Briggs from the U.S. Geological Survey and Prof. Jeffrey McKenzie from McGill’s Dept. of Earth and Planetary Science have just discovered is that the extra shade provided by these willow shrubs has both cooled and dried the surrounding soil, allowing new permafrost to expand beneath them.

The researchers were initially very excited by this find. But after analyzing the thickness of the new permafrost and projecting how it will be affected by continued climate change and the expected rise in temperature in the Arctic of 3°C, they arrived at the conclusion that the new permafrost won’t last beyond the end of the century.

To read “New permafrost is forming around shrinking Arctic lakes, but will it last?” by Martin Briggs et al in Geophysical Research Letters: http://onlinelibrary.wiley.com/enhanced/doi/10.1002/2014GL059251/