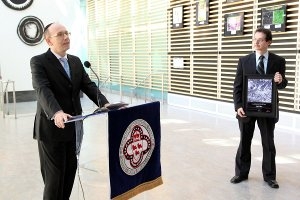 McGill University Professor Dr. Moshe Szyf, Faculty of Medicine, Department of Pharmacology and Therapeutics, has received Radio-Canada’s Scientist of the Year 2009 title for his pioneering work into how our environment can alter the way our DNA expresses genes.

The award has been bestowed upon Szyf, along with Drs. Michael Meaney and Gustavo Turecki, both from the Douglas Mental Health University Institute and Professors of Psychiatry at McGill, for their collective contribution to the field of epigenetics.

"Today I am delighted to join in applause for Dr. Moshe Szyf, whose revelatory research in collaboration with Drs. Meaney and Turecki, postdoctoral researcher Patrick McGowan and the laboratory teams supporting them, has done so much to advance our understanding of 'nature via nurture,'" said Richard I. Levin, Vice-Principal (Health Affairs) and Dean of Medicine at McGill. “With our growing awareness of disease and mental illness on a molecular level, we can begin to respond to the particular needs of an individual in a way that previously eluded us. This is a wonderfully exciting prospect."

"These researchers have all had great success and greatly deserve this kind of recognition," said Rémi Quirion, Scientific Director of the Douglas Institute and Vice-Dean (Life Sciences and Strategic Initiatives) in McGill’s Faculty of Medicine. "They have excelled internationally in their field, and I know that being acknowledged locally for their contributions gives them particular satisfaction. We are extremely proud of their achievements, and I congratulate them wholeheartedly."

Epigenetics is the study of how significant events, particularly those that occur in childhood, can then influence the development of psychiatric disorders by altering the way the genes that are responsible for the stress response, for example, are expressed.

Szyf’s laboratory focuses on how the social environment during early childhood affects the way genes are marked and the machinery that lays down these marks, as well as on developing drugs that act on this machinery as anticancer agents. He made headlines in 2009 with a paper published in Nature Neuroscience about how early negative life experiences affect people’s genes. This work, undertaken with Meaney and Turecki further proved the influence of the environment on DNA.