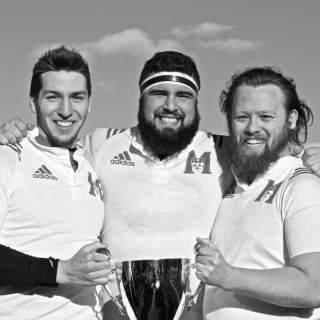 The McGill University men’s rugby team will celebrate the 145th anniversary of the first rugby-football game ever played in the United States when they host Harvard in the annual Covo Cup confrontation on Saturday (Sept. 7). Kickoff is slated for 6:30 p.m. at Percival Molson Stadium (475 Pine Avenue West).

“I am looking forward to being a part of this historic relationship between the Harvard and McGill men’s rugby teams,” says McGill Principal and Vice-Chancellor Suzanne Fortier. “I was so pleased to be invited by our two student athletes and rugby team leaders Dylan Havelock and Andrew Knopp to attend this game and to have the honour of presenting the coveted Covo Cup to the winning team.”

The Covo Cup was launched in 1974 to recognize the centennial celebration of the 1874 McGill-Harvard meeting. The Cup is named in memory of Peter Covo, a former McGill engineering professor and rugby coach who died tragically in a 1973 car accident.

The two collegiate programs first met in the 19th century at Cambridge, Mass., on May 14-15, 1874, for a two-game series that changed the course of North American sports history. A “formal but courteous” challenge to Harvard. The teams played at Harvard in the spring of 1874 and a return match in Montreal in the fall of 1874. Some 500 spectators, mostly students, paid 50 cents apiece to watch the teams play and the $250 collected at the gate was used for a post-game reception and to help cover McGill's traveling expenses.

Harvard eventually adopted the newer rugby style and the game subsequently took root around New England and the U.S., ultimately leading to the development of what is now known as American football.

“Participating in the Covo Cup is an important tradition to all alumni, coaches and current players of the Harvard rugby program,” said Mike Diamantopoulos, head coach of the Cambridge-based institution. “Honoring the tradition and rivalry of the oldest rugby game in North America is something very special that we are honored to participate in and look forward to each year. Rugby is a game of respect -- for the fans, the referees, the opposition, the game -- and these principles are very much shared between the two programs. We are looking forward to celebrating our shared values with McGill on Sept 7.”

The goodwill expressed by the Harvard bench boss was reciprocated on the Canadian side of the border.

“When we attended (our alumni’s) Toronto Summit last year, the coaches and players were struck by how incredibly important the Covo Cup and the Harvard relationship are to our worldwide alumni,” said Ian Baillie, head coach at McGill. “Our efforts to elevate the prestige and visibility of the event this year are a reflection of our desire to honour and support the rightful pride that our alumni take in this game and the history that it represents.”

There are two scheduled games planned for September 7. The first will be the development team (junior varsity) contest at McGill’s Rutherford Field at 3pm and the second will be the official Covo Cup varsity match scheduled for 6:30pm at Percival Molson Stadium. The Covo Cup game will be streamed live at: https://portal.stretchinternet.com/mcgill/.