An Interactive Sustainability Dashboard for Montreal and beyond 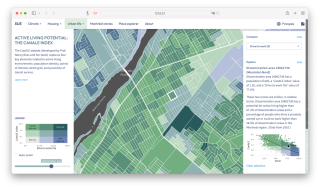 What if you could gather as much sustainability-related information as possible about a city, and use it to create an interactive website to be used by wide and diverse audiences? That is essentially what three McGill professors have assembled with Sus – a new, interactive and fully bilingual English and French-language sustainability dashboard for the Montreal urban area will be launched on April 25 (in French) and April 26 (in English). Its name is a playful reference to “sustainability” but its value to the city can be of great consequence.

The Sus dashboard will use open-source code, and thus be easily adaptable to data sets from other cities and municipalities across Canada: there are already collaborations with Concordia, Université Laval, and the University of Toronto underway.

“The idea behind Sus is to provide a tool for people to explore sustainability issues in Montreal,” explains David Wachsmuth, Associate Professor in the McGill School of Urban Planning and Canada Research Chair in Urban Governance, and one of the three lead researchers on Sus. “There are lots of examples of web dashboards which put layers on a map, but what we’ve tried to do is explore connections, and how different aspects of sustainability issues connect to each other. Sus will show you, for example, a map about the potential for active living across the Montreal region. But it will also show you how that intersects with household income, or concentrations of new immigrants, or people who drive to work versus bike to work, for example, exploring the intersections between different sustainability issues in an interactive, dynamic way.”

The platform will be of interest to a wide range of users interested in sustainability, including scholars and academics, policy makers and community leaders, journalists, and the public. “We've always envisioned it as something that would be useful for an average citizen – a resident of the city who wants to know more about their neighborhood and has some interest in sustainability questions, such as green space provision,” explains Kevin Manaugh, Associate Professor in the McGill Department of Geography and Bieler School of Environment. “Then ultimately we want it to be a tool that decision makers can use.”

What drives Sus is not just knowledge for its own sake but a commitment to environmental and distributional justice: to forms of urban governance and decision-making that must balance competing voices and ideas about the city across space and time, to become truly sustainable. “Sus can identify disparities: exposure to heat island risk, for example, or walkable/unwalkable neighborhoods where seniors can safely walk and access things nearby,” says Manaugh. “It can identify trends, such as people with low incomes living in areas with poor access to healthcare or healthy food. That’s a very tangible concrete thing a policy-maker can use to ask, ‘what do we need to do about land or transport in these areas?’”

Sus is funded by McGill’s Sustainability Systems Initiative (MSSI), an initiative which advances McGill’s commitment to sustainability, and provides opportunities for researchers from very different disciplines to interact and co-design projects that address complex issues from a variety of perspectives. Sus’s three academic leads, Wachsmuth, Manaugh, and Andrew Gonzalez, Professor and Liber Ero Chair in the McGill Department of Biology and Founding director of the Quebec Centre for Biodiversity Science, were selected by MSSI to lead its “Adapting Urban Environments” research theme.

“Andy is a biologist who’s interested in biodiversity and ecosystem services. David has a wealth of expertise about housing and urban governance, and most of my research is based around the idea of environmental justice and transportation equity,” says Manaugh. Sus draws on all their strengths to build something larger than the sum of its parts.

“The researchers were given $1.2M over 5 years to develop a community around sustainability in the built environment,” explains MSSI Director Dr. Heather McShane. In addition to the three leads, a team including graduate students, a postdoctoral fellow and full-time research scientist are involved with various aspects of the dashboard, such as coding and updating it with new data as it becomes available from public and private sources. “What’s exciting to me is Sus’s ability to take data sets that are not usually compatible and bring them into a compatible format you can look at in parallel together. It’s not that frequent that we can really point to knowledge to action. But this time we are really able to do so,” says McShane.

Ultimately, apps and online tools live or die on their usability, but also the communities that they build around them. Sus already prioritizes a simple and user-friendly interface: its next goal is to engage the kinds of communities that will give it prolonged life. “The three of us are very closely connected to different types of user communities. I spend a lot of time talking to mayors, people who are leading the next iteration of their conservation plan, NGOs, foundations, citizen group movements, like the the ruelles vertes (green alleyways) in Montreal: all of these different ways of asking ‘how can we be more sustainable?’” says Gonzalez. “Biodiversity is one of the critical issues that cities are increasingly seeing as a part of a solution. The functional diversity of the green spaces that we manage and restore in an urban context can have a very positive health outcomes for people and nature. There’s a reciprocity between nature and people that is brought into sharp focus in a city. So a city like Montreal that has aspirations of protecting 17% of its natural spaces, but has only protected 10% so far, could benefit from a platform like Sus to guide those conversations.”