Has the U.S. turned a corner toward less urban sprawl? 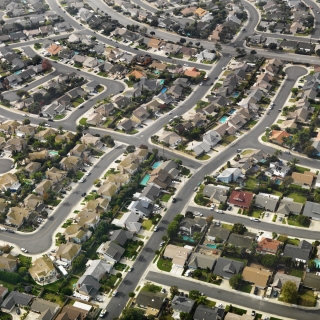 The urban street network is one of the most permanent features of cities. Once laid down, the pattern of streets determines urban form and the level of sprawl for decades to come. In the U.S., urban sprawl has become an enduring hallmark of the past century. Yet, there are some glimmers of hope.

New research by McGill University professor Christopher Barrington-Leigh and University of California, Santa Cruz professor Adam Millard-Ball indicates that sprawl – as measured by the degree to which newly built streets are highly connected and grid-like – peaked in the mid-1990s. Newly built neighborhoods since then have tended to have better-connected streets, with fewer dead-ends.

“We find that even in the absence of a coordinated policy effort, new developments have already turned the corner toward less sprawl,” they write in a study published in Proceedings of the National Academy of Sciences. “Initial impacts on vehicle travel and greenhouse gas emissions will be modest given that the stock of streets changes slowly, but feedbacks are likely to mean that benefits compound in future years.”

The study includes the first high-resolution time series of sprawl from 1920 to 2012, based on the researchers’ reconstruction of historical road networks for many U.S. counties. Their publicly released data provide further opportunities for research on urban development and the social and environmental impacts of different urban forms.

The research was funded partly by grants from the Canadian Social Sciences and Humanities Research Council, the Sustainable Prosperity Network, and the University of California Santa Cruz Committee on Research. L.A. may not be so hopeless, after all A grid of well connected streets, such as the one in most of the central areas of Los Angeles (in blue), allows for densification later on.

But neighbourhoods with many culs-de-sac (red and orange) will be almost impossible to densify when your population grows, making urban sprawl the only option.

“A century of sprawl in the United States,” by Christopher Barrington-Leigh and Adam Millard-Ball, Proceedings of the National Academy of Sciences, www.pnas.org/cgi/doi/10.1073/pnas.1504033112

To explore maps of the main U.S. cities, go to: http://sprawl.ihsp.mcgill.ca/PNAS2015/bgmaps/