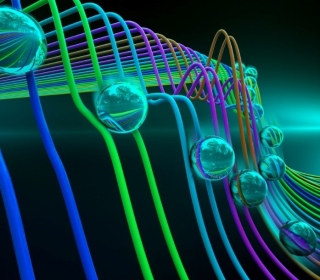 From laptops to cellphones, today’s technology advances through the ever-increasing speed at which electric charges are directed through circuits. Similarly, speeding up control over quantum states in atomic and nanoscale systems could lead to leaps for the emerging field of quantum technology.

An international collaboration between physicists at the University of Chicago, Argonne National Laboratory, McGill University, and the University of Konstanz recently demonstrated a new framework for faster control of a quantum bit. First published online Nov. 28, 2016, in Nature Physics, their experiments on a single electron in a diamond chip could create quantum devices that are less prone to errors when operated at high speeds.

To understand their experiment, one can look to the ultimate setting for speed in classical dynamics: the oval racetracks at the Indianapolis or Daytona 500. To enable the racecars to navigate the turns at awesome speeds, the racetrack’s pavement is “banked” by up to 30 degrees. A student in Newtonian mechanics could explain that this inward slope of the pavement allows the normal force provided by the road to help cancel the car’s centrifugal acceleration, or its tendency to slide outward from the turn. The greater the speed, the greater the bank angle that is required.

“The dynamics of quantum particles behave analogously,” said Aashish Clerk, professor of theoretical physics at McGill University. “Although the equations of motion are different, to accurately change the state of a quantum particle at high speeds, you need to design the right track to impart the right forces.”

Clerk, together with McGill postdoctoral fellows Alexandre Baksic and Hugo Ribeiro, formulated a new technique to enable faster quantum dynamics by deftly absorbing detrimental accelerations felt by the quantum particle. These accelerations, unless compensated, would divert the particle from its intended trajectory in the space of quantum states, similar to how the centrifugal acceleration deflects the racecar from its intended racing line on the track.

Through conversations with members of his own group and the Clerk group, David Awschalom, professor in spintronics and quantum information at the Institute for Molecular Engineering in the University of Chicago, realized that the new theory could be used to speed up the diamond-based quantum devices in his labs. However, just as constructing the banked speedways presented challenges in civil engineering, experimentally executing the control sequences envisioned by Clerk and co-workers presented ones in quantum engineering.

“We demonstrated that these new protocols could flip the state of a quantum bit, from ‘off’ to ‘on,’ 300% faster than conventional methods,” said Awschalom, also a senior scientist at Argonne National Laboratory. “Shaving every nanosecond from the operation time is essential to reduce the impact of quantum decoherence,” he explained, referring to the process by which quantum information is lost to the environment

Professor Guido Burkard and Adrian Auer from the University of Konstanz joined the Awschalom and Clerk groups to examine the data from the experiments. A leading expert in diamond-based quantum systems, Burkard remarked, “What is promising for translating these techniques beyond the laboratory is that they are effective even when the system is not perfectly isolated.”

The researchers anticipate that their methods can be further applied for fast and accurate control over the physical motion of atoms or the transfer of quantum states between different systems, and convey benefits to quantum applications, such as secure communications and simulation of complex systems.