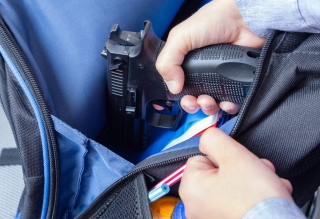 New gun control legislation the federal government tabled Monday includes a national freeze on the purchase, sale, importation and transfer of handguns in Canada. The legislation comes after a number of mass shootings in the United States, including a recent shooting at an elementary school that killed 19 children and two adults in Uvalde, Texas. (CBC News)

“As in the wake of the Sandy Hook school shooting of 2012, the recent mass murder of elementary school children In Uvalde, Texas will spur gun-control supporters in the United States to push for new restrictions on buying weapons. However, they will run into two distinct but related forces: First, the raw political power of the National Rifle Association and the gun manufacturers for whom it serves as a lobby, and second, a deep pro-gun tradition that claims ancestry to the 2nd Amendment but actually derives more from frontier violence and slavery.”

Jason Opal is an Associate Professor in the Department of History and Classical Studies, where he teaches and writes about the U.S. Constitution in different periods of American history. His work tries to integrate social, cultural, and intellectual history and to shed light on such broad topics as nationalism, capitalism, democracy and U.S.-Canada foreign relations.

“Guns foster a sense of belonging. Group identification can rest on sharing radical beliefs that enhance cohesion, including rallying against perceived threats. This mindset helps explain resistance to elementary reforms to regulate firearms. If one believes that an unbridled right to bear arms is not only key to protecting the United States, but also key to what it means to be an American, concessions on gun control become difficult to envision. While conservatives in other Western democracies tend to support significant gun control, a key dimension of American exceptionalism is the relative normalization of a conservative identity in which firearms have acquired a peculiar symbolic value.”

Mugambi Jouet is an Assistant Professor in the Faculty of Law. His research explores how the distinctive and peculiar evolution of the right to bear arms and gun violence in the United States compares to other Western democracies and the relationship between guns and conceptions of identity and nationhood. He is an expert on the distinctive historical evolution of American law, institutions, and sociopolitical culture compared to other Western democracies such as Canada, Australia, New Zealand and various European nations.

"It is my conviction that many societal problems are often 'settled' through gun violence. Since the issues are myriad, I would suggest that the epidemic of gun violence be viewed as a public health concern and be addressed as such."

Myrna Lashley is an Assistant Professor in the Department of Psychiatry and an Adjunct Researcher at the Lady Davis Institute for Medical Research of the Jewish General Hospital. She is the Chair of the Cross-Cultural Roundtable on Security, as well as Vice-chair of the board of the École Nationale de Police du Québec. Her current research interests are in cultural aspects of youth mental health, and cultural aspects of radicalization leading to violence.