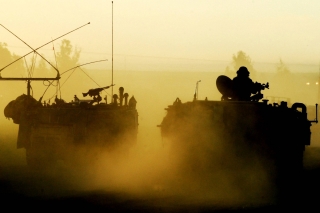 Israel hit three multi-storey towers as it hammered the Gaza Strip with airstrikes, and militants in the territory fired barrages of rockets at Israel, in the most severe outbreak of violence since the 2014 Gaza war, with no resolution in sight. The fighting has taken on many hallmarks of that devastating 50-day conflict between Israel and Hamas, but with a startling new factor: large, heated protests by Israeli Arabs in support of those living in the territories as well as counter-violence by Jewish Israelis. (CBC News)

“The current Israeli-Palestinian violence is not just the result of the legacies of the Trump Administration, rising tensions in Jerusalem, political deadlock in Israel, and the postponement of Palestinian elections. More fundamentally, it is the result of generations of Israeli occupation of the Palestinian territories, the complete absence of a political or diplomatic horizon and an increasingly permanent dynamic of repression that the Human Rights Watch is now explicitly likening to apartheid.”

Rex Brynen is a Full Professor in the Department of Political Science, specializing in politics, security, and development in the Middle East. He has served as a member of the Policy Staff at the Department of Foreign Affairs, as an intelligence analyst for the Privy Council Office, and as a consultant to various governments, UN agencies, and the World Bank.

"Over the last century, millions of Jews made a successful effort to rebuild their national sovereignty in the sites of their ancient homeland. It is a game changing reality that creates sore points of conflict with legitimate rivals for this contested space. Missed opportunities for political compromise and significant misjudgments and incitement on all sides have exacerbated this rivalry. Ultimately a multilateral platform of mutual validation will likely lead to more stable coexistence among Israelis, Palestinians and other national and religious groups in the region."

Yael Halevi-Wise is an Associate Professor in the Department of English and Chair of the Department of Jewish Studies. Her expertise includes studies, history and theory of the novel, Israeli literature and society and modern Jewish fiction.