Don’t scan so close to me 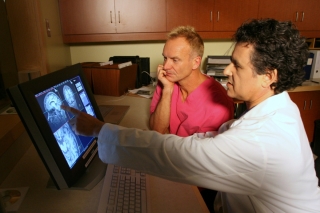 What does the 1960s Beatles hit “Girl” have in common with Astor Piazzolla’s evocative tango composition “Libertango”?

Probably not much, to the casual listener. But in the mind of one famously eclectic singer-songwriter, the two songs are highly similar. That’s one of the surprising findings of an unusual neuroscience study based on brain scans of the musician Sting.

The paper, published in the journal Neurocase, uses recently developed imaging-analysis techniques to provide a window into the mind of a masterful musician. It also represents an approach that could offer insights into how gifted individuals find connections between seemingly disparate thoughts or sounds, in fields ranging from arts to politics or science.

“These state-of the-art techniques really allowed us to make maps of how Sting’s brain organizes music,” says lead author Daniel Levitin, a cognitive psychologist at McGill University. “That’s important because at the heart of great musicianship is the ability to manipulate in one’s mind rich representations of the desired soundscape.”

Lab tour with a twist

The research stemmed from a serendipitous encounter several years ago. Sting had read Levitin’s book This Is Your Brain on Music and was coming to Montreal to play a concert. His representatives contacted Levitin and asked if he might take a tour of the lab at McGill. Levitin -- whose lab has hosted visits from many popular musicians over the years – readily agreed. And he added a unique twist: “I asked if he also wanted to have his brain scanned. He said ‘yes’.”

So it was that McGill students in the Stewart Biology Building one day found themselves sharing an elevator with the former lead singer of The Police, who has won 16 Grammy Awards, including one in 1982 for the hit single “Don’t Stand So Close To Me.”

Both functional and structural scans were conducted in a single session at the brain imaging unit of McGill’s Montreal Neurological Institute, the hot afternoon before a Police concert. A power outage knocked the entire campus off-line for several hours, threatening to cancel the experiment. Because it takes over an hour to reboot the fMRI machine, time grew short. Sting generously agreed to skip his soundcheck in order to do the scan.

Levitin then teamed up with Scott Grafton, a leading brain-scan expert at the University of California at Santa Barbara, to use two novel techniques to analyze the scans. The techniques, known as multivoxel pattern analysis and representational dissimilarity analysis, showed which songs Sting found similar to one another and which ones are dissimilar – based not on tests or questionnaires, but on activations of brain regions.

"At the heart of these methods is the ability to test if patterns of brain activity are more alike for two similar styles of music compared to different styles. This approach has never before been considered in brain imaging experiments of music,” notes Scott Grafton.

“Sting’s brain scan pointed us to several connections between pieces of music that I know well but had never seen as related before,” Levitin says. Piazzolla’s “Libertango” and the Beatles’ “Girl” proved to be two of the most similar. Both are in minor keys and include similar melodic motifs, the paper reveals. Another example: Sting’s own “Moon over Bourbon Street” and Booker T. and the MG’s “Green Onions,” both of which are in the key of F minor, have the same tempo (132 beats per minute) and a swing rhythm.

This research was supported by the Natural Sciences and Engineering Research Council of Canada.