Concussion symptoms in children may have multiple underlying causes 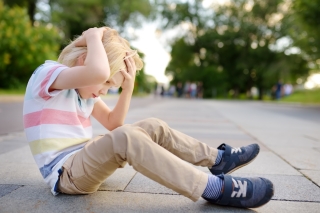 Different types of brain damage caused by a concussion may lead to similar symptoms in children, according to research led by McGill University. A new way of studying concussions could help develop future treatments.

While most children fully recover after a concussion, some will have lasting symptoms. The findings published in eLife help explain the complex relationships that exist between symptoms and the damage caused by the injury.

The researchers found that certain combinations of brain damage were associated with specific symptoms such as attention difficulties. Other symptoms, such as sleep problems, occurred in children with multiple types of injuries. For example, damage to areas of the brain that are essential for controlling sleep and wakefulness could cause challenges with sleeping, as could damage to brain regions that control mood.

To do this, they examined how damage to the brain resulting from concussion affected its structural connection network, known as white matter. They then used statistical modelling techniques to see how these changes related to 19 different symptoms reported by the children or their caregivers.

“Despite decades of research, no new treatment targets and therapies for concussions have been identified in recent years,” says lead author Guido Guberman, a Vanier Scholar and MDCM Candidate at McGill University. “This is likely because damage to the brain caused by concussions, and the symptoms that result from it, can vary widely across individuals. In our study, we wanted to explore the relationships that exist between the symptoms of concussion and the nature of the injury in more detail.”

Guberman and his colleagues analysed data collected from 306 children, aged nine to 10 years old, who had previously had a concussion. The children were all participants in the Adolescent Brain Cognitive Development (ABCD) Study.

“The methods used in our study provide a novel way of conceptualising and studying concussions,” says senior author Maxime Descoteaux, a Professor of Computer Science at Université de Sherbrooke. “Once our results are validated and better understood, they could be used to explore potential new treatment targets for individual patients. More broadly, it would be interesting to see if our methods could also be used to gather new insights on neurological diseases that likewise cause varied symptoms among patients.”