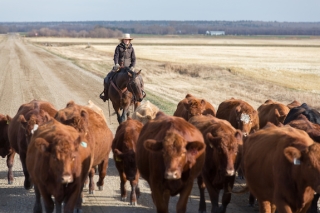 Reactive nitrogen emissions contribute to greenhouse gases, as well as air and water pollution. For the first time, researchers from McGill University have calculated Canada’s nitrogen footprint (akin to a carbon footprint) – at both national and provincial levels. They looked at the three primary sectors that contribute nitrogen to the environment to calculate the annual average nitrogen footprint: food production and consumption, wastewater treatment, and fossil fuel use. There were some surprises when they analyzed their results.

“Past nitrogen footprint studies in other countries have typically emphasized the food system as the main source of nitrogen released to the environment,” says Graham MacDonald, an Associate Professor in McGill’s Geography Department and the senior author on the paper published recently in Environmental Research Letters. “While food production and consumption are important sources of nitrogen in Canada, our research shows that most variation across provinces in a relative sense is related to fossil fuels. This came as a surprise to some of our colleagues.”

Regional variations in magnitudes and drivers of nitrogen footprints

The researchers used a novel top-down approach, which took national and provincial agricultural, energy and other nitrogen emissions data from 2018 to estimate total provincial nitrogen footprints and divided them by provincial populations. Typically, assessments of nitrogen footprints are estimated using a bottom-up approach based on information about personal consumption patterns (e.g. household use of electricity, distances driven or flown, beef consumption, etc.). Using this new hybrid approach, the researchers calculate that Canada’s total annual reactive nitrogen footprint is approximately 996 gigagrams (or 996 million kilograms) per year. This translates into an average nitrogen footprint of about 27 kilograms of nitrogen emitted per person per year in Canada. But this figure hides a lot of regional variation, both in terms of the magnitude and the drivers responsible for these emissions.

“Ontario and Quebec contribute the most to the national nitrogen footprint simply because more than two-thirds of the Canadian population live in these provinces,” says Sibeal McCourt, a PhD student in the Geography Department at McGill and first author on the study. “But Saskatchewan’s nitrogen footprint, on a per capita basis, is the largest in the country, almost double that of Ontario. This is because the province has a strong mining sector and relies on coal and natural gas for energy.”

“Before we can reduce our overall national nitrogen footprint, it is essential to understand which sectors in each province are contributing the most to nitrogen pollution so that the problem can be addressed at a more local levels,” adds McCourt. “This research will help us better understand the where/who/how of actions to reduce nitrogen emissions, assign responsibility to different actors (including our own consumption patterns, like our personal diets), and ultimately use nitrogen more efficiently in Canada.”

Given the relative contribution of meat consumption and fossil-fuel related emissions to provincial nitrogen footprints, the researchers suggest that moving towards more plant-based diets, promoting the use of electric vehicles and continuing to shift towards renewable energy sources for electricity where possible are among the policy options that would be most relevant across much of the country. Steps can also be taken to make the food system as a whole less ‘leaky’ in terms of nitrogen.

“A great deal of research attention is being given to improving nitrogen use efficiency in agriculture, which can go a long way toward mitigating the Canadian nitrogen footprint,” says MacDonald. “What’s particularly insightful about a footprint approach is that it allows us to compare the potential of these different individual and collective efforts toward sustainability.”

Some details about variations in provincial nitrogen footprints

(The three northern territories were excluded from the study due to limited data.)