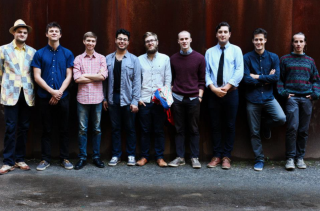 CBC Music and TD are thrilled to announce that Busty and the Bass has won Rock Your Campus, the musical competition for college and university students.

After hundreds of students entered their original song and the public voted for their favourites, the CBC Music audiences with the help from judges: Grammy Award-nominated record producer and songwriter Cirkut, Juno Award-winning Max Kerman from Arkells, and CBC Radio 2 host Talia Schlanger, determined Busty and the Bass as the winner of the competition.

"Congratulations to Busty and the Bass for winning the Rock Your Campus competition" said Chris Stamper, senior vice president, corporate marketing, TD Bank Group. "We're excited to be a part of this initiative, which allows students to showcase their talent and share their music with the country. TD loves music and we're committed to providing opportunities for young people with access to music and music education in communities across Canada - and to help everyone discover a love of music."

"Hopefully Rock Your Campus empowers them to keep going. Being validated once in a while will help in momentum," says Max Kerman from Arkells "I was very surprised, this was much better than the music we made in university. Things are looking up."

"We are blown away by the level of talent on campuses across the country. But ultimately, it had to be Busty and the Bass," says Talia Schlanger. "Exceptional musicianship, wild creativity and pure fun, we can't wait to see where they go."

Busty and the Bass is a nine-piece collective of musicians from across North America who met during their first year studying at McGill University. Originally born out of a small, impromptu Montreal house parties, "Busty" has evolved to become a tight electro-funk band playing powerful original music and innovative covers. Busty and the Bass is one of Montreal's most vibrant and exciting collective, and to attend one of their shows is to be filled with a powerful sensation of energy and freedom, making dancing and shouting irresistible

"A big thank you for giving us a platform to get our stuff out to the world and a big thank you to our fans, who put up with our incessant campaigning over the last couple of weeks. It was exhausting for us and them, I'm sure," says Milo Johnson, bass player for Busty and the Bass. "This process of the competition, of Rock Your Campus, has been such good training for us and a reminder that the music we play is to bring to the places that we come from - our homes, our colleges and of course, our moms. Thank you for allowing us to continue this surge of playing music for people."

Busty and the Bass will receive a $10,000 cash prize, a concert performance at McGill University and the opportunity for a one-year contract to join a YouTube multi-channel network for management, as well as the bragging right title of Best Campus Band 2014.

About CBC/Radio-Canada
CBC/Radio-Canada is Canada's national public broadcaster and one of its largest cultural institutions. The Corporation is a leader in reaching Canadians on new platforms and delivers a comprehensive range of radio, television, internet, and satellite-based services. Deeply rooted in the regions, CBC/Radio-Canada is the only domestic broadcaster to offer diverse regional and cultural perspectives in English, French and eight Aboriginal languages.

A space for us all is CBC/Radio-Canada's new strategy to modernize the public broadcaster and ensure that it continues to fulfill its mandate for Canadians and for future generations. Through to 2020, it will increase its investment in prime time television programming, and continue to create radio programs of the highest quality, while promoting the development of digital and mobile platforms and content.

About CBC Music.ca
CBCMusic.ca is Canada's free digital music service connecting Canadians with the very best in Canadian and international music, concerts and features. Simple and easy to navigate, CBCMusic.ca gives access to 50 Web radio stations, 12 distinct genre-based music communities, CBC Radio 2 and CBC Radio 3, plus content from the most knowledgeable music personalities and programmers from across the country, hundreds of concerts, playlists and more.

About TD Music
Since 2003, TD has helped customers and communities experience the love of music by sponsoring major music festivals across Canada. Every year TD supports many music-based community and educational programs. Continuing with its commitment to support music programs throughout Canada, TD is proud to be a National Sponsor of the 2014 JUNO Awards and Live Nation's year-long concert series.