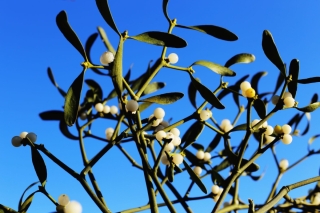 Each mistletoe berry can produce up to two metres of a gluey thread called viscin. It allows the seeds of this parasitic plant to stick to and infect host plants. Since ancient times, mistletoe berries have been explored as treatments for everything from infertility and epilepsy to cancer. But, until now, no one has fully investigated the potential medical or technical uses of the glue itself. A recent paper from McGill University and the Max Planck Institute of Colloids and Interfaces, published in PNAS Nexus, suggests that through simple processing, viscin’s ultra-stiff flexible fibres, which adhere to both skin and cartilage as well as to various synthetic materials, could have a range of applications – both biomedical and beyond.

It is a discovery that came about almost by chance – sparked by the actions of a young girl. “I had never seen mistletoe before living in Germany,” said Matthew Harrington, a senior author on the paper, and an associate professor in the Department of Chemistry at McGill University, and the Tier 2 Canada Research Chair in Green Chemistry. “So, when my daughter was playing with a berry from a mistletoe we bought from a local Christmas market, and it started sticking to everything, I was intrigued.” This is understandable since Harrington’s research focuses on exploring materials and adhesives found in nature and adapting the underlying principles for the development of advanced bio-inspired materials.

A plant with very unusual qualities

The researchers discovered that through simple processing when wet, viscin fibres, which stick to themselves as well as to other materials, could be stretched into thin films or assembled into 3D structures. They believe that this means viscin could potentially be used as a wound sealant or skin covering. What makes the flexible viscin fibres so interesting as a material is that their ability to stick to things is fully reversible under humid conditions.

“I wore a thin film of viscin on my skin for three days to observe its adhesive qualities and was able to remove it from my fingers afterwards by simply rubbing them together,” said Nils Horbelt, a recently graduated PhD student at the Max Planck Institute, and the first author on the paper, who, according to Harrington, brought the creativity and patience of a carpenter (his former profession) to the research. “But there still remain many questions about this very unusual material.”

The researchers’ next goals are to gain a better understanding of the chemistry behind this swellable, extremely sticky material so that they can then replicate the process.

“The fact that viscin can adhere to both wood and skin or feathers, may be relevant evolutionarily speaking,” adds Harrington. “But it’s harder to explain adherence to various synthetic surfaces, such as plastics, glass and metal alloys, from an adaptive point of view. So viscin may simply represent a highly versatile adhesion chemistry, which is what makes it so interesting to explore what is going on chemically.”

Given the excellent properties of mistletoe viscin and the fact that mistletoe plants are abundant, and both biodegradable and biorenewable, these findings suggest that this remarkable plant might provide more than holiday ornamentation in the future.