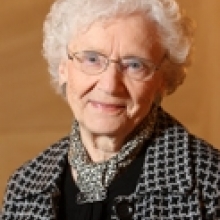 Hanna Pappius was a Professor in the Department of Neurology and Neurosurgery, and was an Associate member in the Department of Biochemistry, McGill University. A dedicated and pioneering neurochemist at the Montreal Neurological Institute (The Neuro) for more than fifty years, Pappius is actively engaged in advancing scientific work at the Institute.

Originally from Poland, Pappius obtained her B.Sc. (1946), M.Sc. (1948) and PhD (1952) from McGill University. Publishing more than 100 papers and lecturing during her 40+ years of research at The Neuro, she made a significant contribution to her field by pursuing studies on cerebral edema and the effect of brain injury on neurotransmitter and receptor mechanisms. She co-authored (with Robert Katzman) a book entitled Brain Electrolytes and Fluid Metabolism, now considered a classic in the field. Pappius is Director of the Library and Vice Chairman at the Polish Institute of Arts and Science at McGill, established in 1943, supported by Wilder Penfield and many others, to preserve the tradition of Polish thought and learning. Among her numerous honours are the Commemorative Medal for the 125th Anniversary of the Confederation of Canada in recognition of significant contribution to compatriots, community and to Canada (1992), the 1993 Award from the Polish Minister of Foreign Affairs for her outstanding contribution to the advancement of Polish culture in the world and a Lifetime Achievement Award (2005) in recognition to her lifelong commitment to The Neuro. In 2009 the honorific Emerita Professor was conferred upon her by McGill University in recognition of her years of devoted and meritorious service as Full Professor.

Since her retirement from lab science in 1995, Pappius has served The Neuro as Chair of the Animal Care Committee and Co-chair of the Research Ethics Board, both critically important for the research enterprise.