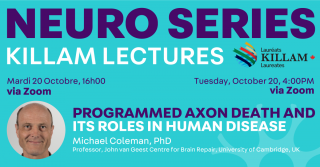 Axons degenerate before the neuronal soma in many neurodegenerative diseases. Programmed axon death (Wallerian degeneration) is a widely-occurring mechanism of axon loss that is well understood and preventable in animals. Its aberrant activation by mutation of the pro-survival gene Nmnat2 directly causes axonopathy in mice with severity ranging from mild polyneuropathy to perinatal lethality. Rare biallelic mutations in the homologous human gene cause related phenotypes in patients. NMNAT2 is a negative regulator of the prodegenerative NADase SARM1. Constitutive activation of SARM1 is cytotoxic and the human SARM1 locus is significantly associated with sporadic ALS. Another negative regulator, STMN2, has also been implicated in ALS, where it is commonly depleted downstream of TDP-43. In mice, programmed axon death can be robustly blocked by deletion of Sarm1, or by overexpression, axonal targeting and/or stabilization of various NMNAT isoforms. This alleviates models of many human disorders including some forms of peripheral neuropathy, motor neuron diseases, glaucoma, Parkinson’s disease and traumatic brain injury, and it confers lifelong rescue on the lethal Nmnat2 null phenotype and other conditions. Drug discovery programs now aim to achieve similar outcomes in human disease. In order to optimize the use of such drugs, we have characterized a range of human NMNAT2 and SARM1 functional variants that underlie a spectrum of axon vulnerability in the human population. Individuals at the vulnerable end of this spectrum are those most likely to benefit from drugs blocking programmed axon death, and disorders associated with these genotypes are promising indications in which to apply them.

The event will be live streamed via VIMEO. 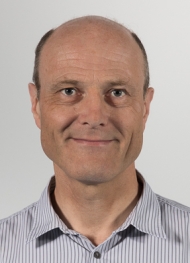 Michael Coleman is the van Geest Professor of Neuroscience at Cambridge UK, studying mechanisms of axon degeneration and synapse loss. He previously led research groups in this field at the Babraham Institute, Cambridge, Cologne, Germany and Oxford, UK. His group identified the first protein known to delay degeneration of injured axons (Wallerian degeneration) leading to the discovery of a pathway of proteins influencing axon degeneration, also in disease models without physical injury. Their finding that ablation of SARM1 can rescue axons permanently following ablation of its upstream regulator NMNAT2 has generated significant Pharma interest the pathway. He also recently published rare human disorders caused by NMNAT2 mutation, a key importance to identifying individuals suited for SARM1-blocking therapies. In separate work, his group has developed an organotypic hippocampal slice culture model of synapse disruption in Alzheimer’s disease, where all major CNS cell types retain near-normal cytoarchitecture while allowing easy manipulation and sampling of the culture medium. They are now using this model to research methods of protecting synapses in Alzheimer’s disease, developing it for drug testing and extending it to other neurodegenerative diseases.
Related Links:
Registration
Last updated: 10/07/2020 - 10:17