Abstract: Synaptic dysfunction is common among all neurodegenerative diseases. Amyotrophic lateral sclerosis (ALS) and frontotemporal dementia (FTD) are two related neurodegenerative diseases where dendritic attrition and synaptic loss occurs prior to clinical and pathological symptoms of the disease. Through poorly defined mechanisms, changes to the structure and function of affected neuron populations in patients with ALS and FTD are initiated by mislocalized or aggregated proteins, which triggers a vicious cycle between microglia activation, neuroinflammation, and proteotoxicity. We present work demonstrating that neuron-specific expression of a disease-linked ALS mutation, fused in sarcoma (FUS) R521G, in mice is sufficient to trigger dendritic attrition and loss of synapses. We find that changes to neuronal integrity precede the activation of astrocytes and microglia. Based on these observations, we are investigating two therapeutic strategies, 1) reducing inflammation through drug-targeted inhibition of the NF-kB pathway and 2) restoring proteostasis through drug-targeted upregulation of heat-shock proteins using histone deacetylases (HDAC) inhibitors and HSP inducers, both of which are aimed at maintaining the neuronal integrity in patients with ALS or FTD. Our findings reveal that both therapeutic approaches restore cognitive and motor function as well as increase dendritic branching and spine numbers in ALS-FUSR521G mouse models. Additionally, both approaches restore altered FUS proteostasis and reduce the activation of astrocytes and microglia. Future work will assess the specific effects of these drugs on cell-types and their ability to restore neuronal function. Together, these discoveries have elucidated the contribution of FUS to synaptic health and dysfunction and identified strategies to treating synaptic dysfunction associated with ALS and FTD.

Bio: Dr. Chantelle F. Sephton received her Bachelor’s of Science in Biochemistry from the University of Saskatchewan in Saskatoon (2002) and her PhD in Psychiatry from the University of Saskatchewan (2007). She did her postdoctoral studies at the University of Texas (UT) Southwestern Medical Center at Dallas under the mentorship of Dr. Gang Yu in the Department of Neuroscience (2007-2014). She started her lab at Université Laval in the CERVO Brain Research Centre in 2014 and is currently an Associate Professor in the department of psychiatry and neuroscience.

Dr. Sephton’s research interests are focused on understanding how translation at the synapse is regulated and how disruption of local translation leads to neurodegeneration. In particular, her research program is identifying the mechanisms by which disease-linked RNA-binding proteins cause synaptic loss and promote amyotrophic lateral sclerosis (ALS) and frontotemporal dementia (FTD), neurodegenerative diseases that affect over 40,000 people in Canada. This work stems from the discovery that RNA-binding proteins including TDP-43 and FUS are mutated in familial forms of ALS and FTD. Mutations in these proteins result in their cytoplasmic mislocalization and aggregation, which are thought to contribute to neurodegeneration in these diseases. Stemming from her post-doctoral work and the discovery of the biological functions of disease-linked RNA-binding proteins, her current work now focuses on: 1) understanding the mechanisms by which disease-associated mutations of TDP-43 and FUS influence RNA metabolism and synaptic function; 2) investigating the effects of disease-linked RNA-binding proteins on non-cell-autonomous contributions to developing disease phenotypes; and 3) Identifying and testing therapeutic approaches to treating ALS and FTD. 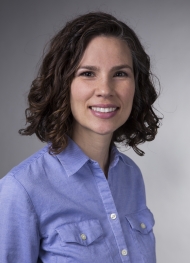