Abstract: The human brain sets us apart as a species, with its size being one of its most striking features. Brain size is largely determined during development as vast numbers of neurons and supportive glia are generated. In an effort to better understand the events that determine the human brain’s cellular makeup, and therefore its size, we use a human model system in a dish, called cerebral organoids. These 3D tissues are generated from pluripotent stem cells through neural differentiation and a supportive 3D microenvironment to generate organoids with the same tissue architecture as the early human fetal brain. Such organoids are allowing us to tackle questions previously impossible with more traditional approaches. Indeed, our recent findings provide insight into regulation of brain size and neuron number across ape species, identifying key stages of early neural stem cell expansion that set up a larger starting cell number to enable the production of increased numbers of neurons. We are also investigating the role of extrinsic regulators in determining numbers and types of neurons produced in the human cerebral cortex. Overall, our findings are pointing to key, human-specific aspects of brain development and function, that have important implications for neurological disease.

Bio: Dr Madeline Lancaster is a Group Leader in the Cell Biology Division of the Medical Research Council Laboratory of Molecular Biology (LMB), part of the Cambridge Biomedical Campus in Cambridge, UK. Madeline studied biochemistry at Occidental College, Los Angeles, USA, before completing a PhD in 2010 in biomedical sciences at the University of California, San Diego, USA. She then joined the Institute of Molecular Biotechnology of the Austrian Academy of Sciences (IMBA) in Vienna, Austria as a postdoctoral researcher where she developed the first cerebral organoids, before joining the LMB in 2015.

How to participate via Zoom:

1. You can either join a meeting via the invite link or the Meeting ID #.

2. If you click the link it will automatically bring you to the meeting. If you do not have the link and only the meeting ID go to the Zoom application and click “Join a meeting” where it will prompt you to input your name and the Meeting ID #.

3. Use the toolbar at the bottom of your screen to mute/unmute yourself and to enable/disable your video. 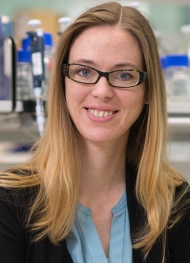