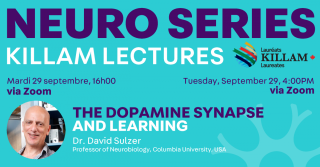 The actions of dopamine within the striatum are central to the selection of cortical and perhaps thalamic inputs that mediate learning throughout life, including during operant conditioning, reward and avoidance learning and the establishment of motor patterns. Dysfunction of these synaptic circuits during maturation or aging underlies many neurological, psychiatric and neurodevelopment disorders. We will discuss the biological sequences by which these synapses are altered as an animal interacts with the environment.

The event will be live streamed via VIMEO. 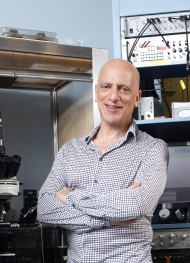 David Sulzer, Ph.D., is a professor of Psychiatry, Neurology, Pharmacology and the School of the Arts at Columbia University. His lab has published over 200 studies on synaptic function in normal and diseased states that are cited over 40,000 times. He is the founder of the Gordon Conference on Parkinson’s Disease, the journal Nature npj Parkinson’s Disease and co-founder of the Dopamine Society. He has received awards from the McKnight, Simons, Helmsley, NARSAD, Huntington’s, and Aaron Diamond Foundations and has given named lectureships at the National Institutes of Health, Harvard, Yale, and UCSF. His students and postdocs have received Fulbright, Marshall, and Regeneron awards for their work in the lab, and past trainees are professors at Columbia, Rutgers, Cornell, Yale, Lund, Pittsburgh, Jefferson, Tufts, , Karolinska, Ecole Normale Superieure, NYU and Emory (Joseph Cubells in the Dept. of Psychiatry).
Related Links:
Registration
Last updated: 09/29/2020 - 08:54