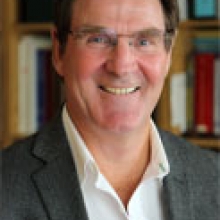 Alan Evans is a James McGill Professor of Neurology and Neurosurgery, Psychiatry and Biomedical Engineering at McGill University since 2009, and a researcher in the McConnell Brain Imaging Centre (BIC) at The Neuro. He holds the Victor Dahdaleh Chair in Neurosciences.

He is co-director of the Ludmer Centre for Neuroinformatics and Mental Health and is Principal Investigator of CBRAIN, a pan-Canadian project to integrate Canadian brain research with the Compute Canada high-performance computing grid. He is the sole Canadian participant in the $1.1 billion European Human Brain Project, and is a co-principal investigator of the Big Brain project. He is Scientific Director of McGill’s $84 million CFREF project, “Healthy Brains for Healthy Lives.”

Evans was principal investigator in the Montreal Consortium for Brain Imaging Research (MCBIR), which was founded in 2000 with a $35 million award from the Canada Foundation for Innovation.

He was a co-founder of the International Consortium for Brain Mapping (ICBM), a multinational effort funded by the U.S. Human Brain Project to create a computational atlas of the adult human brain. He was one of the founders of the Organization for Human Brain Mapping (OHBM), serving in numerous positions on the OHBM Council since 1995. In 2020, Evans was awarded one of Canada’s highest honours, the Killam Prize, in recognition of his many contributions to the understanding of the human brain.

Evans obtained his B.Sc. (1974) in Physics at Liverpool University and his M.Sc. (1975) in Medical Physics at Surrey University. Evans completed his Ph.D. (1979) and post-doctoral fellowship studying structure-function interaction of proteins at the Department of Biophysics at Leeds University in the U.K.  Subsequently he worked for five years as a PET physicist at Atomic Energy of Canada in Ottawa.

Evans' research interests include cognitive neuroimaging, neuroanatomical variability, and image-processing methodologies for PET and MRI. He pioneered the technique of multi-modal 3D brain imaging with PET and MRI, which provides detailed 3D images of brain anatomy.

As BIC Coordinator from 1992 to 2000, Dr. Evans fostered the development of brain “activation” studies in which specific brain regions show subtle changes in blood flow in response to cognitive and sensorimotor stimuli. This so-called brain-mapping technique is widely used to map human brain functions. Dr. Evans extended these techniques to large-scale studies of brain anatomy.

This work has spun off a new company, Biospective Inc., which performs fully automated analysis of neuroimaging databases collected as part of pharmaceutical clinical trials.

Evans was awarded a Computerworld-Smithsonian Award for achievements in information science and medicine. In 2014, he was awarded the Vezina Prize for Quebec Neuroradiology, and the Margolese National Brain Disorders Prize from the University of British Columbia. In 2015, he was inducted as a Fellow of the Royal Society of Canada and elected OHBM Chair. In 2016, he was awarded Quebec’s highest honour for scientific research, the Prix du Québec (Wilder Penfield), and the magazine Science ranked him #6 in a list of the most influential brain scientists of the modern era. In 2020, Evans was awarded one of Canada’s highest honours, the Killam Prize, in recognition of his many contributions to the understanding of the human brain.

Evans has published over 550 peer-reviewed papers, and is a member of numerous international advisory boards, review panels and research collaborations. He was acknowledged as a Thompson-Reuters Highly Cited Scientist for 2014 and 2015 (top 1% in Neuroscience and Behaviour).