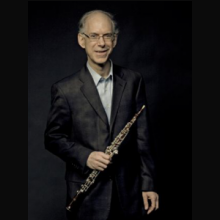 Theodore Baskin has been Principal Oboe of l’Orchestra Symphonique de Montréal since 1980. With l’OSM, he has been the featured soloist on several tours to Canada, United States, South America and Japan, performed the standards of the oboe concerto repertoire and participated in over 80 recordings and 40 international tours.

In Montreal, he gave world premieres of two works commissioned for him: “Concerto Pour Hautbois” by André Prévost in 1994 and “Hautbois Concertant” by José Evangelista in 2012, performed as part of the inaugural season of the Maison Symphonique. In 1984, he travelled to Moscow with a grant from the U.S. National Endowment for the Arts to perform a new work for oboe and orchestra as well as the Moscow Premiere of Alfred Schnittke’s Concerto for Oboe and Harp, recorded for Radio Moscow.

Solo and chamber music recordings include four Vivaldi Concerti for Chandos Records, described in the Penguin Guide to CDs as “the highlight of the concert ...phrasing combines elegance and finesse...a superb soloist in every respect.” He has recorded several woodwind chamber music works with Les Vents de Montréal for ATMA and solo repertoire for CBC and Radio New Zealand.

Mr. Baskin has performed and taught at numerous festivals in North America including Orford Musique, Domaine Forget, Grand Teton, Mostly Mozart Festival with the Chamber Music Society of Lincoln Center, and Marlboro Festival including a highly acclaimed Music from Marlboro Tour of woodwind octets. Previous to joining l’OSM, he had been a member of the Detroit Symphony, Auckland Symphonia and Israel Philharmonic in various principal positions.

Mr. Baskin was appointed Professor of Music at Indiana University where he taught from 2000-2002. He has taught masterclasses and Woodwind Octet Coaching at Orford Music for several summers.

Theodore Baskin studied oboe with Arno Mariotti and John de Lancie. He attended the Juilliard School, received a Bachelor of Music from the Curtis Institute of Music, and a Master of Music with honours from the University of Auckland, where he completed a thesis: “An Analysis of Five Bach Cantatas”.