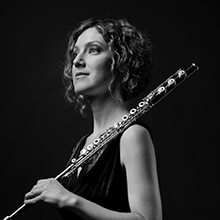 Naama Neuman has received acclaim performing in Europe, Asia, Israel, North and South America as a soloist, chamber, and orchestral musician. She held the solo flute positions of the Komische Oper Berlin and the Wuppertal Symphony Orchestra and second flute of the Israel Philharmonic Orchestra.

An enthusiast of contemporary music, Ms. Neuman was a member of the Israel Contemporary Players, where she has performed numerous premieres of new pieces that were written for her and the ensemble.

Supported by scholarships from the America-Israel Cultural Foundation, she holds a BA from the Jerusalem Academy for Music and Dance, Israel, a Masters of Music from Hochschule für Musik und Darstellende Kunst, Stuttgart, Germany and a Graduate Artist Diploma from the Schulich School of Music, McGill University.

As Music Director of the Nazareth Music Conservatory and the Galilee Chamber Orchestra, she helped bring Jewish and Arab Israelis together through their shared love of music.

Ms. Neuman’s arrangement of Grieg’s Violin Sonata No.1 has been published worldwide in 2020 by Edition Svitzer. Her other arrangements of classical masterworks are published on Edition Neuman, founded in 2021.

Her students have won scholarships and auditions in Israel, Germany and Canada.