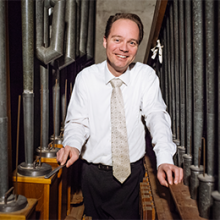 Hailed for his "stylishly imaginative" performances, Jonathan Oldengarm maintains a full schedule as a collaborative artist and soloist on organ and harpsichord. A prizewinner at several national and international competitions, he concertizes extensively in Europe and North America. Recent performance highlights include the Schlosskirche (Wittenberg, Germany); Maison symphonique and St. Joseph Oratory (Montreal), Ensemble Caprice, Orchestre classique de Montréal, and the Montreal Symphony Orchestra. The most recent of his seven commercial recordings is of Canadian music for organ and saxophone on the Klanglogo label, together with German saxophonist Claudia Tesorino; and a complete YouTube broadcast of Bach's Leipzig chorales is to be released beginning in February, 2021. He has been broadcast on the CBC, Radio Canada, Sirius Satellite Radio, NPR, RTÉ, and the European Broadcasting Union. He holds a doctorate in organ performance from McGill University; the Fellowship diploma of the Royal Canadian College of Organists; and studied at the Hochschule für Musik in Stuttgart, Germany and Wilfrid Laurier University. He teaches organ performance and liturgical improvisation at Schulich School of Music of McGill University; is a member of the Quebec Religious Heritage historical organs committee; serves on the Royal Canadian College of Organists' Examinations Committee; and is Director of Music and Organist at the Church of St. Andrew and St. Paul, Montreal.