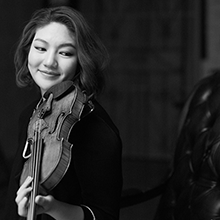 A passionate teacher, Jinjoo is on the violin faculty at the Schulich School of Music at McGill University and has previously taught at the Cleveland Institute of Music and Oberlin Conservatory. She is also the Founder/Artistic Director of ENCORE Chamber Music, an intensive summer training program for talented young performers in Cleveland, and regularly gives master classes worldwide.