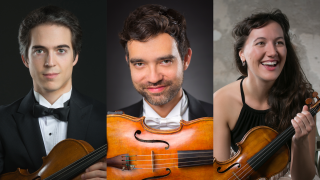 Beginning this season, the Toronto Symphony Orchestra (TSO) welcomes three Schulich School of Music alumni into their esteemed ensemble: Victor Fournelle-Blain (ADip ’15) as Principal Violist, Rémi Pelletier (LMus ‘04) as Associate Principal Violist, and Yolanda Bruno (BMus ’11) as Section Violinist! On their new appointments, Interim Artistic Director Sir Andrew Davis writes, “We are delighted that these wonderful musicians have chosen the TSO to be their home for the coming season. They will further enhance the high quality of our glorious orchestra and I look forward to working with them."

Catch Victor, Rémi, and Yolanda on stage as of September 19 and 21 when the TSO kicks off their 2019-20 season with Dynamic Duo: Hannigan & Storgårds.

A trained violinist and violist, Victor Fournelle-Blain is equally at home with orchestral, chamber, and solo repertoire. He has performed with l’Orchestre symphonique de Montréal since 2014, is the founding member of the Grand Duc Trio, and regularly collaborates with renowned artists such as Charles Richard-Hamelin, Andrew Wan, and Brian Manker. Past awards include second prize of the 2010 OSM Standard Life Competition and grand prize of the 2012 Prix d’Europe and the 2014 Golden Violin Award.

An accomplished competitor, Yolanda Bruno is the winner of the 2017 Isabel Overton Bader Violin Competition and the 2013 OSM Standard Life Competition. In addition to being named one of CBC’s 30 Hot Canadian Classical Musicians under 30, she is also the three-time recipient of the Sylva Gelber Career Development Award and the recipient of Canada Council’s Virginia Parker Award. She has performed across North America and Europe and in 2018, was appointed concertmaster of the Kingston Symphony Orchestra.

About the Toronto Symphony Orchestra

Founded in 1922 by a group of Toronto musicians, the TSO has since grown to become one of Canada’s most respected arts organizations. The orchestra is committed to serving local and national communities through vibrant performances and expansive educational activities that resonate with people of all ages and backgrounds. Their notable recording and broadcast history, complemented with their international touring engagements, allows them to be a unique musical ambassador for Canada around the world. Learn more about the TSO.