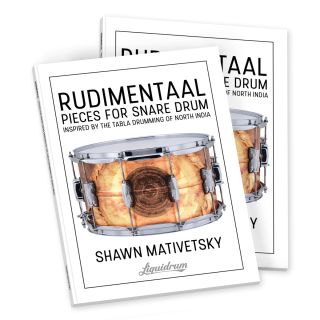 Prof. Shawn Mativetsky has released ’RUDIMENTAAL’, a collection of rudimental snare drum pieces inspired by the tabla drumming of North India. By bridging together two principal percussion instruments and their respective musical traditions, the book works as a gateway into North Indian drumming for drummers and percussionists from all backgrounds. RUDIMENTAAL comes loaded with exercises, as well as narrative explanations that shed light on the compositional forms, rhythmic devices, and performance practices of North Indian tabla drumming. There are several compositions provided, along with instructions for how to piece them together, allowing for numerous possible permutations in designing your own solo snare drum performance based on your repertoire preferences. In addition to these shorter compositions that can be used as building blocks for larger pieces, three complete standalone solo pieces are also included.