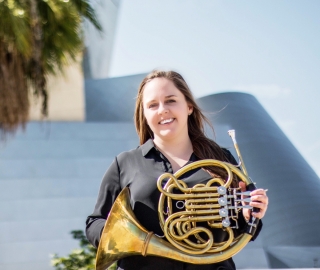 Rachelle Jenkins (MMus ’13) published the Audition Playbook, a two-part guide and workbook for optimal planning and preparation of orchestral auditions, in May of 2018. Designed for musicians of all levels and instruments, the Audition Playbook helps readers carefully and effectively create, implement, and follow their own plans from start to finish.

Rachelle spent two years freelancing in Florida and Montréal after completing her Master’s at the Schulich School of Music of McGill University. Performing quite regularly with top ensembles, she was not finding the same success in auditions as she was as a freelancer. After years of little to no success advancing in auditions, Rachelle decided to return to school and enrolled at the Colburn School in Los Angeles. At Colburn, she studied horn with Andrew Bain, principal horn of the Los Angeles Philharmonic, and performance with Dr. Don Greene, author of Performance Success and Audition Success.

Influenced by her studies with Bain and Greene, she started to develop her own planning system for efficiently preparing for auditions. Experimenting with an early draft of her system, she advanced for the first time in years at an audition for L’Orchestre symphonique de Montréal. From there, she gained momentum both in auditions and in the development of the book, regularly making finals in many auditions and using each experience to make the Audition Playbook more effective and accessible to any reader.

During her final year at Colburn, Rachelle published the Audition Playbook, which includes a foreword written by Dr. Don Greene. Since its launch, feedback from readers has been overwhelmingly positive and the project continues to evolve, with articles and interviews published regularly on the website and social media (@auditionplaybook on Facebook and Instagram).