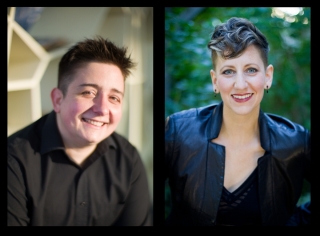 We are pleased to welcome special guests Ari Agha and Laura Hynes to the Schulich School of Music to discuss their project “The Key of T: Exogenous Testosterone and the Transgender Singing Voice” November 17th at 10 am as part of ReVoice. This event is open to all Schulich students.

About the Key of T

A lower voice is one of the changes most desired by transgender people assigned female at birth (AFAB) who take testosterone (T). While taking testosterone does lead to a lower voice, some people also experience vocal problems such as a persistently weak, hoarse, or unstable voice. Making the decision to start testosterone can be difficult for transgender singers as there is a lack of systematic information on how T affects the singing voice.

Ari and Laura began collaborating on Key of T in the summer of 2016, just a few months before Ari began their testosterone therapy. The project includes a research portion documenting Ari’s voice transition and an interdisciplinary social justice performance to tell the story of their voice change. Watch a short video about their project here.

Ari Agha (they/them pronouns) is a researcher, writer, and musician. They received a B.A. from the University of Miami where they minored in music with a voice focus, singing for four years under the direction of Dr. Jo-Michael Schiebe with the University Chorale. Ari has a Ph.D. in Sociology and over ten years of experience conducting public policy research on topics including the use of solitary confinement in correctional settings, justice system responses to sexual assault, and preventative social programming for marginalized populations. They sing with Spiritus Chamber Choir in Calgary, Alberta, Canada and Essence of Joy Alumni Singers (Penn State). An advocate of feminism, anti-racism, and trans rights, Ari has a blog where they discuss gender, singing, and current events.

Laura Hynes (she/her pronouns) is an American coloratura soprano who spent six years in France and Germany, performing repertoire ranging from Baroque opera with Les Arts Florissants to “classical cabaret” on French television and radio. She has performed opera roles, solo recitals, and concerts throughout Europe and North America, in venues including New York’s Alice Tully Hall, London’s Barbican, Paris’s Châtelet and Cité de la Musique, and more. In 2015, Laura joined the performing arts faculty at the University of Calgary. Her research there focuses on innovation in art song recital through social justice issues (Raise Your Voice), transgender voice transition, and collaborative performance creation. She holds degrees from the University of Minnesota (DMA) where she was the Carolyn Bailey and Dominick Argento Fellow, the Paris Conservatory (Cycle de perfectionnement), the Cincinnati College-Conservatory of Music (M.M.), and Miami University (B.M.).

In preparation of their presentation, we asked Ari and Laura a few questions over email:

Why was it important to you to document Ari’s journey with testosterone therapy?

When I (Ari) first considered taking testosterone I quickly learned that there was very little research on how it impacts singing. As a researcher, I had the skills to design a solid study. Laura (Hynes) brought the knowledge and experience with voice. Together we were a great team to do this work.

The Key of T has two parts to it, the case study itself and the interdisciplinary social justice concert that brings together science and art to share Ari’s voice changes, celebrate a supportive transition experience, and explore connections between voice and identity. Was it always the plan to showcase the results in this way or was this concept developed later on? Whose idea was it?

Ari, in one of your blog posts, you mention that you noticed shifts in your singing voice around five months after beginning testosterone therapy. Can you describe these changes? Were any of them surprising or unexpected to you?

We’re going to share a lot about how my voice changed in our presentation, including playing some excerpts of how it sounded at different points in the process. The very first changes became noticeable about five months in, but the process has continued to unfold in both expected and unexpected ways since then.

There isn’t a lot of information available on how the singing voice changes during testosterone therapy. How do you hope this field will expand in the future?

There has been more research on speaking voices and T, as well as a few case studies on singing and T, since we first began this work in 2016. It would be great to see more rigorous, well-documented case studies of how singing voices change with exogenous testosterone, so we can have a better sense of the different kinds of experiences people have, instead of relying so heavily on the few studies we have so far.

How can choirs be more supportive of their transgender singers?

That’s a big question. I’d recommend taking a look at an article I (Ari) wrote for Chorus America on this subject: Making Your Chorus Welcoming for Transgender Singers.

What advice would you give to singers who are looking to start testosterone therapy?

Another big question! Again, Laura and I will be talking in a lot of detail about how exogenous T impacted my singing voice in our presentation, so that’s one way to learn more. When I decided to take T I followed three recommendations that we think are still sound:

In our presentation, we’ll say more about why these recommendations are important.

ReVoice is an exciting programme of activities centered around conversations with 23 leading artists.  In addition to discussing masterworks, historical and stylistic approaches, it will tackle several important issues related to programming, diversity, and inclusion. With the guidance of guests and through weekly projects, ReVoice will explore important topics including cultural appropriation, anti-racism in classical music, the transgender singing voice transition, and working with indigenous artists.