Q&A with Alain Cazes: Banding together 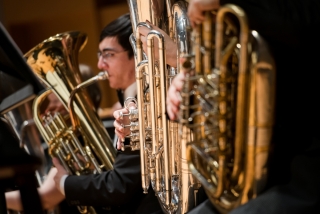 Principal tuba of the Orchestre Métropolitain and co-founder of the Philharmonie des vents du Québec, Alain Cazes is a Professor of Brass and Conducting at the Schulich School of Music. In addition to performing, conducting, teaching, and composing, he directs the McGill Wind Orchestra, which will join the Royal 22e Régiment Band on September 27 for a free concert as part of Les journées de la culture. The event is one of hundreds of free cultural activities taking place across Quebec from September 27 to 29, organized around the theme of rencontres or encounters.

We asked him about the event and the theme of Les journées de la culture. Don’t miss the concert at 7:30pm on September 27th in Pollack Hall!

What does it mean to you and the ensemble to share the stage with the Royal 22e Régiment Band?

This « rencontre » means a great deal since the Royal 22e Régiment Band is probably the most important professional Wind Orchestra in Canada, for many reasons, including the historical aspect and the level of the musicianship of this fantastic group. I have had many opportunities to work with them in the past in the context of masterclasses in conducting, or just attending concerts. So, it became a dream for me to combine our forces with great repertoire that can act as a source of inspiration for our students, and thus show them a potential opportunity to make a living as professional musicians.

How is the program constructed?

We have six (6) pieces on the program; two will be performed by McGill’s ensemble, two by the Royal 22e, and two by both ensembles combined. The works on the program are all originally composed for wind orchestra, but nevertheless show contrasts of mood, colour, and musical aesthetic. The conductors will conduct their respective ensembles and co-conduct the two combined pieces. The concert also includes a woman conductor, who will direct the first piece on the program, as well as a woman composer.

Why are musical collaborations important?

Musical collaborations are important because they represent a source of inspiration for everyone, both the artists and the audience. They are experiences of sharing that contribute to human « rapprochement ». Collaborations of any kind contribute to greater mutual respect and refinement through mutual attention to combining different perspectives into a unified whole.