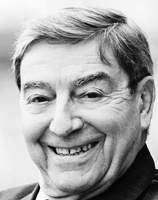 It is with great sadness that we announce the passing of E. Noël Spinelli on October 16, 2020. A dynamic entrepreneur as well as a visionary and philanthropist, Mr. Spinelli played an important role in building many Montreal musical institutions. He was a devoted supporter of the Schulich School of Music and was a member of the Faculty Advisory Board for many years. A lover of opera and vocal music, he established the E. Noel Spinelli Prize in Music to support the careers of young singers studying at the School. The Schulich School of Music is grateful to have been a recipient of his generosity towards developing musicians for so many years.

Mr. Spinelli was born in 1927 in Lachine, where his family ran a gas station and garage. In the 1960s, he transformed it into a Toyota dealership that has since become a multi-franchise operation. As a young man, he studied trumpet, bass, and voice, and trained at the Conservatoire de musique du Québec à Montréal. He was a star crooner in the 1950s and dreamed of becoming an opera singer.

Driven by a desire to share his passion for music by making it accessible to everyone, Mr. Spinelli launched numerous projects and events. Some of his many endeavors include co-founding Concerts Lachine, a non-profit organization that produces free classical music concerts accessible to all. He also founded Concerts Spinelli, a showcase for young musicians, and was instrumental in establishing the Atelier d’art lyrique de Lachine. He chaired a million-dollar fundraising campaign to restore the historic Casavant organ at Saints-Anges-de-Lachine church, and co-founded and chaired (2006–13) the Canadian International Organ Competition, which supports young organists at the international level.

A Member of the Order of Canada and a Knight of the National Order of Quebec, Mr. Spinelli received the Ramon John Hnatyshyn Award for Voluntarism in the Performing Arts in 2019.