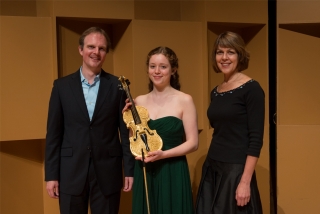 We are thrilled to announce that violinist Maïthéna Girault is this year's winner of the Golden Violin Award, following an exciting public competition held Sunday October 29, 2017 in Pollack Hall. Girault, accompanied by Meagan Milatz, performed the Allegro from Beethoven's Sonata for Piano and Violin No. 5 in F major, Op. 24, the Allegro Molto from Fauré's Sonata for Violin and Piano No. 1 in A major, Op. 13 and finished with the virtuosic Ravel's Tzigane.

All three of the final contestants (violinist Maïthéna Girault, violist Marina Thibeault and cellist Carmen Bruno) are current students at the school and were selected on Sunday October 22nd by the string faculty as finalists during the first round of the competition, which saw six participants perform. All nominated students have demonstrated exceptional talent and contribution to musical and cultural life at the school.

Maïthéna Girault was admitted to the Conservatoire de musique de Montréal at age eight where she spent 10 years under the tutelage of Helmut Lipsky. In September 2014, she entered the Schulich School of Music where she began studies with Andrew Wan and Alexander Read. Since September 2016, she studies with Axel Strauss. Recipient of the 2016-17 Lloyd-Carr Harris Scholarship, Maïthéna obtained a Licentiate in Music and is currently completing a Graduate Diploma in Performance.

In December 2015 she founded the Milton String Quartet, winner of the 2017 Fischoff National Chamber Music Competition Grand Prize and the 2016 McGill Chamber Music Competition. Since its inception, the quartet has participated in lessons and masterclasses for members of the Alban Berg, Borodin, Ébène, Escher, Hagen, Jupiter, and Tokyo quartets. The ensemble recently appeared on CBC Music's lists of 30 Canadian classical musicians under 30, and Montreal's 10 emerging acts to watch.

The Golden Violin Award itself was established in 2006 by businessman and philanthropist Seymour Schulich, a year after he donated $20 million to McGill's Schulich School of Music. The Golden Violin, made of pewter and gold plate, remains on permanent display in McGill's Marvin Duchow Music Library. Its recipient, chosen by a jury and a rigorous selection process, receives a generous scholarship, valued this year at $25 000, as well as a smaller likeness of the violin in the form of a 14-karat lapel pin. The eleven previous winners are Emmanuel Vukovich, Lambert Chen, Chloé Dominguez, Aaron Schwebel, Ewald Cheund, Isaac Chalk, Baptiste Rodrigues, Victor Fournelle-Blain, Byungchan (Chan) Lee, Joshua Peters and Joshua Morris.

Additional prizes this year include career coaching sessions with Andrew Kwan of Andrew Kwan Artists Management and performances in Toronto and Montreal within the regular Schulich School of Music concert season.