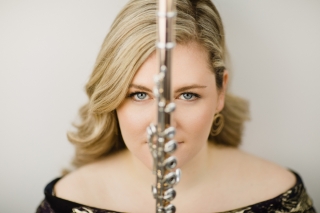 Flutist Lara Deutsch is this year’s recipient of the $125,000 Mécénat Musica Prix Goyer 2019-20 Award for Collaborative Emerging Artist! Presented biennially in honour of Jean-Pierre Goyer and his contributions to music, arts, and culture in Montreal and the rest of Canada, the Mécénat Musica Prix Goyer is Canada’s largest classical music prize for emerging young artists. The award, valued at $125,000, comprises of a $50,000 cash prize, the opportunity to create, distribute, and market 18 classical music videos, a new composition by composer Matthias Maute, and business coaching. Past winners include violinist Marc Djokic in 2017-18 and pianist Philip Chiu in 2015-16.

The prize will be presented to Lara on Wednesday, September 11, 2019, at 6:00 pm, at the Mécénat Musica and Ensemble Vocal Arts-Québec’s iLove culture concert at Chapelle historique du Bon Pasteur.

On the achievement Lara comments, “It’s an incredible honour to be recognized by Mécénat Musica, an organization which is so deeply committed to fundraising for the future of the arts because they understand their value to society. They have all of my respect and gratitude. Receiving the Prix Goyer also means a great deal to me on a personal level, as its inaugural recipient was Philip Chiu, the collaborative pianist (and a dear friend) with whom I worked extensively during my six years at McGill. He has always been a musical inspiration of mine and taught me much of what I know about how to play chamber music. It’s a privilege to share this honour with him.”

Named one of the “Hot 30 Under 30 Canadian Classical Musicians” by CBC Music, flutist Lara Deutsch is a versatile soloist, orchestral, and chamber musician with a passion for connecting with audiences.

She is currently based in the Ottawa-Montreal area and is a regular performer with the National Arts Centre Orchestra (NAC), the Orchestre symphonique de Montréal (OSM), and the Ottawa Symphony Orchestra. Past orchestral engagements include the position of Assistant Principal Flute and Piccolo during the Vancouver Symphony Orchestra’s 2016-17 season, among others.

An avid chamber musician, Lara has taken part in festivals across Canada, the United States, and Europe, with recent highlights including recitals for CBC Radio’s CBC/McGill Series, the Orchestre symphonique de Montréal’s Virée Classique, and the Music & Beyond Festival. Among her favourite collaborators are pianists Philip Chiu and Frédéric Lacroix, oboist Anna Petersen, and most prolifically, harpist Emily Belvedere, with whom she founded Duo Kalysta. Their debut album, Origins, was just released on September 6, 2019, on the Leaf Music label, and will be toured internationally in 2020.

A strong competitor, she is the laureate of several impressive prizes including first prize at the OSM’s 2014 Manulife Competition (where she also took home the Stringray Music Audience Award and six other smaller prizes) as well as grand prize at both the 2014 NAC Orchestra Bursary Competition and the 2010 Canadian Music Competition. She was also a laureate of the 2016 Concours Prix d’Europe. During her time at the Schulich School of Music, Lara won the McGill Concerto Competition two years in a row, resulting in two solo performances with the McGill Symphony Orchestra in 2014.

Lara is dedicated to engaging with young audience and is a frequent performer of educational outreach concerts, both as a member of the NAC’s Ayorama Wind Quintet and in collaboration with the SOMA String Quartet. She is similarly dedicated to sharing her transformative experiences through performance psychology training and has hosted workshops for performers of all levels at universities in Quebec and Ontario.

Learn more about her career and upcoming performances.