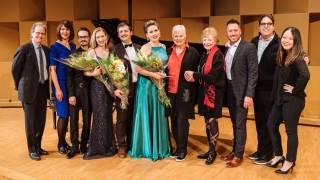 Jenny will receive a $25 000 cash prize and 14-karat gold lapel pin of in the shape of the Wirth Prize logo—a small crown—and is scheduled to appear in recital at the Chapelle Historique du Bon-Pasteur on April 5, 2020. The other two finalists, Sarah Dufresne and Joé Lampron-Dandonneau, were each awarded a $1000 cash prize. A total of eleven graduate and undergraduate students were nominated for the preliminary round, which took place in January; each of them prepared a twenty-five-minute program of opera and art song selections in at least three languages. All the nominees are highly accomplished members of the Schulich Voice Area who bear witness to the exceptional level of skill, passion, and artistry among Schulich vocalists.

Described as a “high mezzo with unique warmth and round clarity in her voice” (Texas Performs Art News), Mexican mezzo-soprano Jenny Ivanovna began her studies at the San Juan Conservatory XXI and received a Bachelor of Music Performance from the University of North Texas. Jenny is currently completing a Masters in Opera and Voice at the Schulich School of Music of McGill University. In 2014 Jenny was named “one of the best voices of Tamaulipas” and went on to participate as a guest recitalist in the International Festival of Music in the state of Tamaulipas. She was a finalist in Conaculta, FONCA competition held during the first Mexican reality show in Opera, Ópera Prima.

About the Wirth Vocal Prize

This year marks the fifth anniversary of the Wirth Vocal Prize in vocal performance, which was established in 2015 through the extraordinary generosity of Elizabeth Wirth. Awarded yearly since its inception, the Wirth Vocal Prize recognizes a voice student at the Schulich School of Music who demonstrates exceptional talent and significant promise for an international career.