Dean Brenda Ravenscroft on women, diversity and accessibility in music 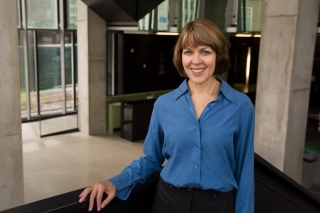 In November 2017, Dean Brenda Ravenscroft won the the Society for Music Theory's 2017 Outstanding Multi-Authored Publication Award for the first volume of Analytical Essays on Music by Women Composers (in collaboration with co-editor Laurel Parsons). We recently spoke to Dean Ravenscroft about this publication, as well as issues she's encountered in regards to diversity and accessibility in the global music community.

Can you tell us about what inspired you to edit a four-volume series devoted to compositions by women across Western art music history?

I’ve always been conscious of the gender imbalance in the field of music theory, where, for example, the ratio between female and male members in the Society for Music Theory is about 3 to 7. But I gradually also became aware of how rare it was at music theory conferences to hear analysis papers on compositions by women. It’s not uncommon for a multi-day conference to include not a single paper on a piece composed by a woman. This seemed both peculiar and alienating to me.

When my longtime friend and colleague, Laurel Parsons suggested that what was needed to address this was not isolated articles on music by female composers, but a critical mass of scholarship, I was immediately interested. We decided to collaborate on a book project with the goal of bringing music composed by women into the scholarly discourse - which in turn would influence its inclusion in performance and teaching.

Although our initial concept was a single collection of essays on music by women composers from all periods, our call for proposals resulted in a surprisingly high number of submissions, and we realized that we had enough material for several collections. This expansion in scope and scale is important: a single volume suggests that music written by women is rare and focuses attention on the gender of the composers. Four volumes organized by time period and genre shifts the focus to the range and depth of their compositional activities. Working on multiple volumes simultaneously is not a small task, however, and the collaborative approach has been essential in sustaining the project!

It's stated in your book (Analytical Essays on Music by Women Composers: Concert Music, 1960-2000) that despite the many explorations of the life and careers of women by musicologists, analytical articles discussing music by women only represent a mere 1.51% of content in eight noteworthy music theory and analysis journals. How do you explain that?

It’s a shocking statistic, isn’t it, and I don’t have a simple explanation. I don’t believe it’s a conspiracy to exclude music by female composers, but rather a culture in which music by women is not valued as highly as that by men, and where the dominant gender in the field has simply paid little attention to addressing the imbalance. There are also practical issues. At least for the early centuries, the ways in which society restricted the ability of women to compose and, particularly, to publish their music means that we have a smaller body of repertoire from them. It is also challenging for scholars to research music about which little or nothing has been written. This is what we are trying to address with our book series: to lay the groundwork for further research into a wide range of exciting and interesting music composed by women.

As the first full-term woman Dean of the Schulich School of Music of McGill University in its 113 years of existence, how you define diversity in 2018 in the context of an institution for higher education in music?

First of all I am delighted to have the privilege of holding the position of Dean at this wonderful School, and, as the first full-term female Dean, I believe I have a responsibility to both model and enhance diversity.

Diversity takes many forms in higher education, starting of course with the demographics of our students, faculty and staff. I believe we need to make conscious efforts to diversify our community; our School exemplifies excellence and a diverse community will enhance this excellence. We need to recruit people from under-represented populations, and to intentionally portray the School as a welcoming environment for everyone.

But it goes beyond demographics. Does our curriculum reflect the diversity of areas of study within our disciplines? Are we attentive to diverse modes of student learning? Do we make the effort to include a diverse range of music in out teaching and performing? A season – or even a single concert program – that only includes music by white men is simply not good enough in 2018. Every ensemble, regardless of genre or time period, should at the very least be deliberately seeking to include music by women composers.

What potential obstacles stand in the way of more diversity in the future, and perhaps a more balanced representation of women and cultural minorities? Where should efforts be made to improve this?

The biggest obstacle is attitude: complacency, accepting the status quo as “normal,” willed ignorance or indifference to the issues, or, worse still, belief that under-represented groups are not worthy of inclusion. Efforts need to be made everywhere and by everyone. No gesture or act is too small, and we all share the responsibility of achieving greater diversity and inclusion in our community. We have to be proactive, make purposeful choices to enhance diversity – and we need to remain vigilant and attentive.

Last term I established a working group to examine and enhance issues of accessibility, diversity, and inclusion at the School. They are working with other McGill units with experience in these issues, and will be focusing on three aspects: the built environment, communication and interaction, and pedagogy.

As a first step, we have developed a vision statement, in consultation with the Schulich community:

The Schulich School of Music is committed to promoting diversity, inclusion, and accessibility in our learning and employment environment, our artistic and social interactions, and our engagement with all communities. The School aims to foster a climate of understanding and mutual respect for the dignity and worth of all persons. We strive to identify, remove, and prevent the barriers that hinder full and meaningful participation in all aspects of campus life. All members of the Schulich School of Music community share the responsibility of supporting these values and goals.

I believe the working group’s recommendations will not only allow us to make meaningful short-term improvements here at the School, but will provide us with long-term goals to aspire to, ensuring that enhancing diversity remains a priority in the future.