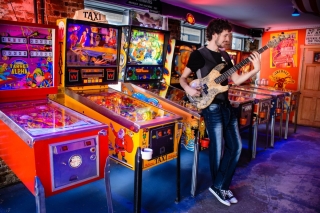 Twenty-six-year-old bassist, composer, and arranger Carl Mayotte (MMus ’19) has been named this year’s Révélation Radio-Canada in the jazz category! Performing at various events and bars since the age of 16, Carl has travelled with his art through Quebec and France as a solo artist, as well as alongside other musicians and bands of all kinds. He credits his studies at Campus Notre-Dame-De-Foy, Université de Laval, and McGill University for aiding in his growth as a musician, and for his techniques in arranging and composition.

In celebration of his recent success, we reached out to Carl for a short email Q&A.

What does it mean to you to be named as the Révélation Radio-Canada Jazz 2020?

It means a lot, especially with the changes the four last months have brought to musicians. It was hard to find energy or concentration because I had lost most of my gigs and there were no signs of reopening for a long time. The arrival of this title has certainly given me a new energy and helped me create new music for a new album. Being named Révélation Radio-Canada Jazz has also boosted my credibility. Over the last 10 years, I have always followed the Radio-Canada Révélation. For me, it was a way to celebrate the artists and their interesting music. To see now my name on the list of young jazz artists is unreal and is a reminder to continue even when you may sometimes doubt yourself.

Tell us more about Fantosme, the album which lead you to win Révélation Radio-Canada.

Fantosme is my first solo album. I was able to work with my dream team and it allowed me to live out a dream by co-producing it with my mentor and idol Michel Cusson. Michel was the guitarist of the legendary group UZEB, a milestone in the Quebec fusion scene. The music on this is album is primarily a mix between many genres of music, from jazz, rock, funk, Latin music, pop music, etc. The art of mixing music styles has always been important for me and will always be a part of my creation process. It is a way for me to create links between audiences and to introduce people to jazz music. The title is an old way to write the ghost in French. I love saying that this album is like a magical formula to wake up a ghost from the past, like the old fusion scene from the ‘70s.

As someone who has studied at three different schools (including your master’s degree here at the Schulich School of Music), what advantages do you think attending music school offers developing musicians?

So many advantages including the knowledge I acquired and the incredible teachers I have met my on my path that helped me to learn more about my instrument, music and myself. All the other young students and musicians that I have met in theses schools are now my friends and colleagues. Universities are always a good way to make contacts. For example, I have met almost all of the musicians on my album through school. Finally, school has taught me to be myself, my best and own teacher. Even after being done school, I am still learning so much day after day.

What does the Quebec music scene have to offer young musicians?

The greatest thing the Quebec music scene provides young musicians is a universe where it is possible for musicians of different levels to make a living from music. There are also so many styles that you can play here. Quebecers are very open to creative music. I think that it is why I can go play jazz from Rimouski to Saguenay and that many peoples will find an interest in it. Sadly, jazz has in a way been seen in the recent years like intellectual and non-accessible music. This is why sometimes we have to recreate these links from the past with our audiences. The potential is there, and it makes the Quebec music scene so alive and original.