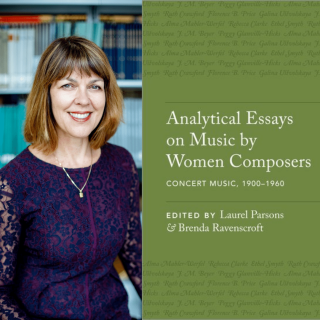 Professor of Music Theory and former Dean of the Schulich School of Music, Brenda Ravenscroft has recently published a new book entitled Analytical Essays on Music by Women Composers: Concert Music, 1900–1960 with editor Laurel Parsons. This is the third in a series of volumes about music by women composers that have garnered critical acclaim and multiple awards, including the Outstanding Multi-Author Publication Award from the Society for Music Theory (Volume 3 in 2017 and Volume 1 in 2021).

This collection of essays follows the editors' two other highly influential collections on the work of women composers, Analytical Essays on Music by Women Composers: Secular & Sacred Music to 1900 and Analytical Essays on Music by Women Composers: Concert Music, 1960-2000, the latter having won the Pauline Alderman Award for an outstanding book-length monograph about women in music in 2017. The award is granted for exceptional scholarship on women in music every two to three years by the International Alliance of Women in Music (IAWM).

This new book — as with the previous volumes — is designed to challenge and stimulate a wide range of readers, by exploring musical structures while integrating meaningful feminist theory.

Each essay is introduced by a brief biographical sketch of the composer by editors Ravenscroft and Parsons. Using a variety of methodologies to understand the work of featured composers, these exciting volumes have immediate and relevant applications.

For academics, these thoughtful analytical essays can open new paths into unexplored research areas in the fields of music theory and musicology. Post-secondary instructors may be inspired by the insights offered in these essays to include new works in music theory and history courses at both graduate and upper-level undergraduate levels, or in courses on women and music. For soloists, ensembles, conductors, and music broadcasters, these detailed analyses can offer enriched understandings of this repertoire and suggest fresh, new programming possibilities to share with listeners.

Congratulations, Prof. Ravenscroft, on this latest impressive accomplishment and the lasting impact of your scholarship.