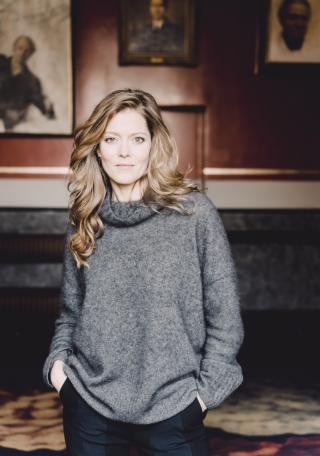 The award-winning Canadian soprano and conductor Barbara Hannigan is slated to virtually visit Schulich’s Voice Area! An artist at the forefront of creation, Hannigan is known for her performances of contemporary opera. She has shown a profound commitment to the music of our time and has performed premieres of over 85 new works. Some of her unforgettable operatic performances have been with the world’s leading opera companies such as the Royal Opera House, Gothenburg Symphony Orchestra, l'Orchestre philharmonique de Radio France, Opéra national de Paris, the London Symphony Orchestra, among many others. In August 2020, Hannigan created the new international project Momentum: Our Future, Now, an initiative driven by leading international artists supporting younger professional colleagues in the first substantial phase of their career.

In preparation for her visit, we reached out to Hannigan over email to ask her a few questions.

‘Momentum: our future, now’ is an impressive project. What lead you to create it, and how do you see it going forward?

The creation of Momentum was a direct result of the many hours of conversations I had with young professional artists over the past 8 months. They were telling me time and again that because of the crisis caused by the Covid-19 pandemic, the momentum they were just beginning to generate during the first phase of their professional career, had come to a standstill. They felt helpless, because in many cases, the only artists being asked to headline what few concerts were still being planned, were leading, established artists. I realized that if leading artists would invite younger professional artists onto their mainstage events, we could share our engagements with them, provide guidance, help them build their networks, and keep many of them performing. So, I quickly created Momentum, set it up as a simple and flexible model, and then made hours and hours of phone calls to leading artists around the globe to create the initiative as a kind of collective. The extraordinary wall of faces one sees on the homepage of our website, www.momentum-now.com, is a result of those conversations - first with young artists and then with established artists.

As far as how it will go forward, I am thrilled at how my colleagues are implementing the Momentum initiative, with more and more events added every day. Artists are creative and generous, and this combination is leading to even more possibilities under the Momentum umbrella than I had envisioned. I feel that, while the initiative was born of urgency, it has long term staying power because it fulfills a need in our industry, and in others, to nurture the next generations.

You recently conducted and sang in a live stream (without audience) of Mahler's 4th Symphony with the Gothenburg Symphony Orchestra (Sweden). How was this experience and how did it differ in comparison to previous live performances?

This was a very special moment in my musical journey. I have been singing Mahler's 4th Symphony for almost 25 years, but the idea to both conduct and sing it came up a few years ago. The performance in Gothenburg, a few weeks ago, was the first time! I had the"luxury" of a few extra months (!!) to really dig deeply into the score, and along with several of my assistant conductors, including Montreal's Simon Rivard, created a "total immersion project" on the symphony, and Mahler's life and work leading up to it. This is how I spent a large part of my time since the crisis began. Long walks with Mahler every day, living and breathing his music, studying his "Wunderhorn" vocal works, his first 3 symphonies, the philosophers who influenced him, and of course, the 4th Symphony itself. The week in Gothenburg, with the orchestra with whom I have strong chemistry, was very moving. Because we know we would only be streaming (and Gothenburg has had an excellent system of cameras set up in their hall to stream their concerts since 2012), it was not totally foreign to us to perform in this way. Kind of like a radio broadcast. The only difference was, not having also a live audience, I did not turn away from the orchestra for the final movement in which I sing. Instead, I stayed facing the orchestra and sang to them. I think we will never forget this. And, to make things even more serendipitous, my assistant Simon Rivard flew over from Montreal, was a fantastic assistant as a culmination of all our study, and we were able to add an engagement for him, as conductor for a second event the day after the Mahler (conducting Schoenberg Op 2 orchestrated for soprano and chamber ensemble).

Conducting and singing is not very common. When did you decide that you wanted to pursue both?

I tried it first in 2010 with Ligeti's Mysteries of the Macabre, as the piece lent itself well to that kind of "control". It does not work with every piece but some music has a kind of dramaturgical reason which makes the form make sense. I made my official debut as conductor in 2011 at the Chatelet in Paris and things really started rolling after that.

What advice would you give to young emerging artists?

Be curious about all kinds of music, disciplined in your study, and practice, exercise, develop yourself as a person with studies beyond music. All of this will enrich your artistic soul.

Barbara Hannigan will virtually join Schulich on Friday, October 16 at 10:00 am. This event is open to all current students, faculty, and administration. Zoom information can be found in your McGill email.