Cellist Astrid Schween enjoys a varied career as a soloist, chamber artist, and teacher. Since joining the Juilliard String Quartet in 2016, she has appeared at many of the world’s great concert halls and venues, including Amsterdam’s Concertgebouw, the Vienna Musikverein, Berlin Konzerthaus, Wigmore Hall, Tokyo’s Yamaha Hall, Lincoln Center, 92nd Street Y, Ravinia, Tanglewood, and Kennedy Center as well as in Hong Kong, Singapore, Greece, China, Spain, Holland, Denmark, Norway, and throughout Canada and the U.S.

At age 16, Schween made her concerto debut with the New York Philharmonic and conductor Zubin Mehta, who also arranged a special invitation for her to study privately in London with the legendary Jacqueline du Pré. With degrees from Juilliard, Schween received her primary training under the guidance of Leonard Rose, Harvey Shapiro, Channing Robbins, Ardyth Alton, and H.T. Ma, with additional studies under Bernard Greenhouse and Eugene Moye. She performed in master classes for Philippe Muller and William Pleeth and participated in the Marlboro Music Festival.

Schween maintains a lively solo performance schedule in addition to her extensive touring with the Juilliard String Quartet. In recent years, she performed the Elgar Concerto with the Boulder Philharmonic and received recital and master class invitations from Tanglewood, the Eastman School of Music, Boston Conservatory, Violoncello Society of New York, and Cleveland Cello Society. She has been featured in Strings and Strad magazines and on NPR, and was a guest speaker on women in music at the Library of Congress.

Schween is a longtime member of the Lark Quartet, with which she earned the Naumburg Chamber Music Award and gold medal at Russia’s Shostakovich Competition, and her ongoing collaborations include regular appearances at the Seattle Chamber Music Festival and numerous recital engagements with pianist Victor Asuncion. Formerly cellist of the Boston Trio, she was a frequent guest with the Boston Chamber Music Society. Her recordings appear on the Sony, Arabesque, Decca/Argo, CRI, New World, JRI, Centaur, NAR, and Point labels.

A dedicated and passionate teacher and mentor, Schween is a member of the cello faculties at Juilliard and the Perlman Music Program. 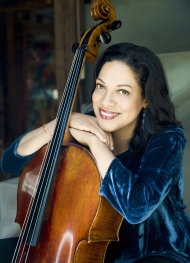