Brazilian born Fábio Brum is an international trumpet artist and newest member of the internationally acclaimed CANADIAN BRASS. He has lived and studied in five different countries and appeared in more than thirty countries around the world as a soloist, orchestral performer and teacher.

Fábio acted as Principal Trumpet of the Orquestra Sinfônica Brasileira (Brazil) and of the Real Orquesta Sinfónica de Sevilla (Spain) for over 10 seasons. He is a graduate of the University of Louisville (USA) and of the Hochschule für Musik, Karlsruhe (Germany). 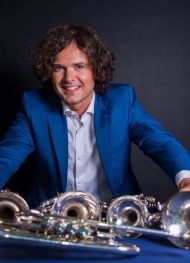