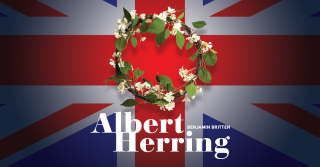 November 8-10, 2018 | Pollack Hall | 7:30 pm*
A pre-concert lecture by Patrick Hansen will take place one hour before each performance in Clara Lichtenstein Hall.

Don't miss Opera McGill's rendition of Benjamin Britten's comic masterpiece Albert Herring! Telling the hilarious story of a young man who's crowned "King of the May" against his will in small-town England, the opera features a 13-piece orchestra conducted by guest Andrew Bisantz. Described by Patrick Hansen (Director of Opera McGill) as "one of the greatest pieces written in the 20th Century," be sure to catch this production during its three-day run as part of the Lisl Wirth Black Box Festival.

Box Office: Tickets are available online or through our Box Office (in person or by phone: 514-398-4547) between 12:00pm and 6:00pm (555 Sherbrooke Street West). Applicable taxes included, service fees apply to the purchase of tickets online.