This paper was written over a one-year span: January 2020 to January 2021. As I was writing, March 2020 brought the pandemic; June brought the movement for racial justice; November was a quicksand of lies; and in January of 2021 my (U.S.) nation’s erosion of democracy had its denouement in the insurrection of January 6. But in an unexpected way over this year, the motivating idea for the paper was amplified as these events blazed into my life.

The paper takes up the question of how in music studies a commitment to an ontology of multiplicity can be understood to entail an ethics of truth and how truth and ethics can produce equity. I turn briefly to four authors who already in the 1980s--Haraway, Butler, Badiou, and Harding—were committed to an ontology of multiplicity and to how to achieve an ethics of truth. Then, I argue that music analysis can and should address music’s multiplicities with analyses that are true, ethical and lead to equity. I demonstrate this with my analysis of Chaya Czernowin’s Anea Crystal, a 2008 work for 1 or 2 string quartets.

A handout detailing the analysis is attached, which you may wish to download if you're planning to attend (it will be easier to read as a pdf than over Zoom). 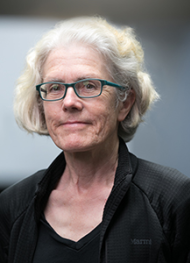 Judy Lochhead is a music theorist and musicologist whose work focuses on the most recent musical practices in North America and Europe, with particular emphasis on music of the western classical tradition.
Last updated: 02/23/2021 - 09:25
Back to top
McGill University
Copyright © 2021 McGill University
Accessibility Sign in (site maintenance)