“‘All That Matters Here Is Talent:’ Musical Talent and the Politics of Meritocracy in (Neo)Liberalizing India”

In contemporary India, “talent” is a densely multivalent term that at once indexes an individual’s musical potential and points to the possibility of a previously unimaginable social mobility. This paper examines the emergence of discourses of “talent” through Indian reality music television shows following India’s market liberalization in the 1990s. Comparing two early shows – SaReGaMa and Indian Idol – I trace how a newly fetishized conception of talent has emerged as the primary commodity of the reality music TV industry. Situating these musical discourses of “talent” within larger neoliberal ideologies emerging in India today, I argue that talent has come to function as an important form of socially disembedded merit undergirding a new social myth of meritocracy. Investigating the ideological work of “talent” through mediated musical practice in India, this paper contributes to recent critiques of meritocracy as a governing principle of social valuation and promotion across both India and North America.

Anaar Desai-Stephens is an Assistant Professor of Ethnomusicology at the Eastman School of Music, University of Rochester. Anaar received her Ph.D. in Ethnomusicology from Cornell University in 2017, where she received the annual Donald J. Grout award for best dissertation in music. Her work has been supported by Cornell University’s Randel Dissertation and Teaching fellowship and the American Musicological Society’s Howard Mayer Brown Fellowship.

She is writing her first monograph, Voicing Aspiration: Bollywood Songs and the Dreamwork of Contemporary India, which explores the role of popular music and media in the formation of an aspirational musical economy in neoliberalizing India. She is the co-editor of “Musical Feelings and Affective Politics,” a recently published double issue of the interdisciplinary journal Culture Theory Critique. Trained as a violinist, Anaar is an active performer across a range of genres and currently plays with the Brazilian forró band “Forró estrellas du norte” (North Stars Forró). 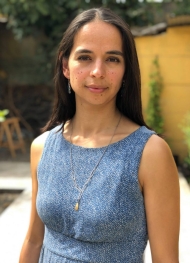 Anaar Desai-Stephens is an Assistant Professor of Ethnomusicology at the Eastman School of Music, University of Rochester.
Last updated: 03/29/2021 - 16:15
Back to top
McGill University
Copyright © 2021 McGill University
Accessibility Login