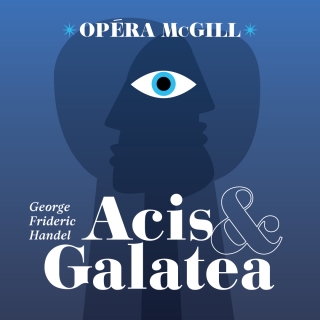 Pre-concert lecture one hour before each opera

To close the 2019-2020 season, Opera McGill joins forces with the McGill Baroque Orchestra and Cappella Antica to perform one of Handel’s most famous works for stage: Acis and Galatea. Often described as the pinnacle of pastoral opera in England, the work tells the story of the love of shepherd Acis for the Nymph Galatea, and of the cyclops Polyphemus’ jealousy-driven opposition to their love. Featuring poignant drama, but also a good amount of wit and self-parody, Acis and Galatea is sure to please!

The performances on March 28 and 29 will be webcast.

Following the recommendations of the Government of Quebec and with the safety of our students, staff, faculty, visiting guests, and dedicated audience in mind, please note that effective immediately, all public performances have been cancelled for the rest of the 2019-20 season in order to reduce the spread of coronavirus COVID-19. Tickets purchased to affected events will be given full refunds. For up to date information, please monitor McGill University’s coronavirus webpage.
Category:
Source Site:
/music
Tags:
Concerts
External
Faculty
Graduate Students
Staff
Students
Undergraduate Students
Webcasts