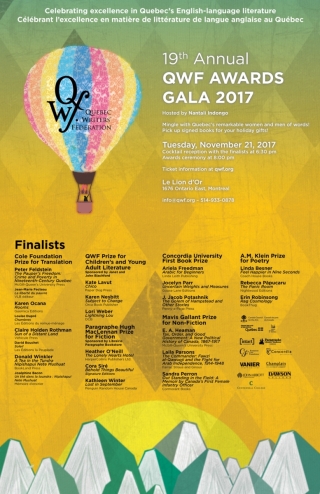 The McGill Institute for the Study of Canada is pleased to announce that the Quebec Writers' Federation has selected Tax, Order, and Good Government as a finalist for the Mavis Gallant Prize for Non-Fiction. Published this past June by McGill-Queen's University Press, the work is a culmination of extensive research on early Canadian tax debates performed by current MISC Director and Professor Elsbeth Heaman. Through rigorous analysis of private papers, commissions, the press, and all levels of government from coast-to-coast, Tax, Order, and Good Government provides insightful analysis on the history of Canadian taxation and its profound impact on the relationships between wealth and poverty, and state and society.

The finalists for the Mavis Gallant Prize also include The Commander: Fawzi al-Qawuqji and the Fight for Arab Independence, 1914–1948 by Professor Laila Parsons, jointly appointed by the Institute of Islamic Studies and the Department of History and Classical Studies, and Out Standing in the Field: A Memoir by Canada’s First Female Infantry Officer, by Sandra Perron.

The Quebec Writer's Federation will announce the winners of the prize and others at the 19th Annual QWF Awards Gala, taking place on Tuesday, November 21st. Please see the attached poster and QWF's event page for more details.

For more information on Tax, Order, and Good Government or to order a copy, refer to the McGill-Queen's University Press.