Public Talk and Q&A with Veldon Coburn: Anti-Indigenous Racism and Justice in Saskatchewan: Challenges and Impediments to Reconciliation 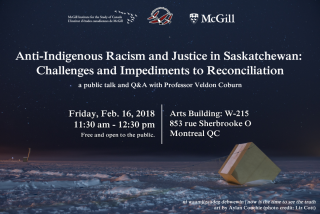 Across the country, the recent Stanley trial verdict has been the subject of intense discussion giving rise to protest, calls for solidarity, and demands for changes to the justice system. Hostile debate, racist behaviour, and mounting tensions surrounding the case have, as a result, exposed large cracks in Canada's projected image of progress towards reconciliation, casting doubt on the existence of improved relations between settlers and Indigenous communities.

In an effort to address the anti-Indigenous sentiment that has surfaced following the verdict, Professor Veldon Coburn will open his CANS 306: Issues in Native Studies class with a public talk followed by a Q&A session on justice & race in Saskatchewan. All members of the public are welcome to attend; however, as space is limited, we recommend sending an RSVP misc.iecm [at] mcgill.ca (subject: RSVP%3A%20Public%20Talk%20and%20Q%26A%20with%20Veldon%20Coburn%3A%20Anti-Indigenous%20Racism%20and%20Justice%20in%20Saskatchewan%3A%20Challenges%20and%20Impediments%20to%20Reconciliation, body: Hi%2C%0A%0AI%20intend%20on%20attending%20Friday's%20public%20talk%20and%20Q%26A%20with%20Veldon%20Coburn%3A%20%22Anti-Indigenous%20Racism%20and%20Justice%20in%20Saskatchewan%3A%20Challenges%20and%20Impediments%20to%20Reconciliation%22) (by email). Seating will otherwise be given on a first-come, first-served basis.

Artist statement: As long-time cohabitants, the residents of North Bay and Nipissing First Nation have had a relationship that has been, at times, contentious with respect to the health their shared waterway, Lake Nipissing. A seemingly never-ending conflict over the declining population of pickerel finds many area residents and businesses blaming the Anishinaabeg for netting. Almost every media article that mentions Lake Nipissing, even without reference to the fishery, still finds the comments section filled with racist, anti-Indigenous sentiments and calls to revoke treaty rights. At the same time, these commenters overlook the unacknowledged history of settlers who have, themselves, overfished these waters in the past and continue to take from Nbisiing, both in summer and winter, with hundreds of ice huts dotting the frozen landscape. This work looks to illustrate this ongoing tension which continues to disrupt local relationships and the process of reconciliation.